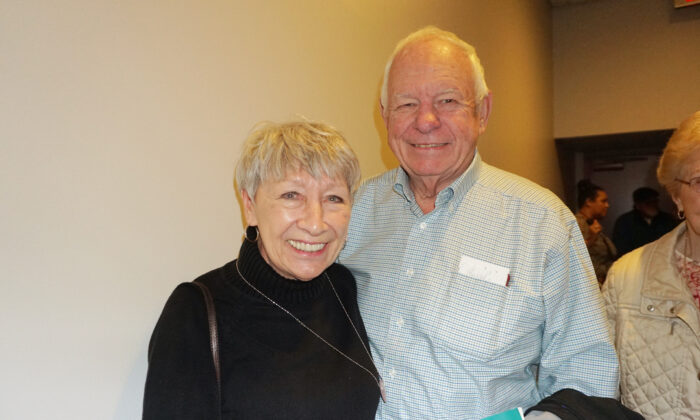 UNIVERSITY PARK, Ill.—Cement parking lots give way to grassy prairies south of one of the United States’ largest and most hectic metropolises—Chicago. There, surrounded by 750 acres of fields, Governor’s State University became the perfect out-of-town venue for Shen Yun Performing Arts, the world’s premier classical Chinese dance company. Residents came to the campus from all over to take in the colorful, majestic production.

“[Shen Yun], it’s almost surreal,” said Lynn Ahlden, president of the board for the Kankakee Valley Symphony Orchestra. “Yes, it’s absolutely beautiful. The talent, the physical skills, all of it. I didn’t quite know what to expect. I read a little bit about it but I’m thrilled. I’m thrilled.”

Ahlden attended New York-based Shen Yun on March 5, 2020, at the Center for Performing Arts at GSU and was astounded by the orchestra, especially by two Chinese instruments, the erhu and the pipa, that are incorporated into the classical Western-style orchestral experience.

“This is beautiful, I’ve not been here before,” Ahlden began, before sharing her response to the live orchestra, “Oh it’s wonderful, and I was really interested in the two unique instruments. Now, I kept leaning forward [toward the orchestra pit] and I didn’t want to be in anyone’s way.”

“I think music, talent like that, it’s something we all have in common and appreciate the beauty,” she added.

With a history of over 4,000 years, the erhu is an instrument that seems to embody China’s heritage and the depth of that rich culture. According to Shen Yun’s website, “The erhu is incredibly expressive, capable of imitating sounds from chirping birds to neighing horses. … In its lowest and middle range, the erhu is especially stirring and somber, a quality eminently suitable for conveying the grand pageant of China’s history and the emotions of its people.”

Shen Yun’s mission, in fact, is to revive traditional Chinese culture and to share it with the world. And since China’s civilization has always been profoundly spiritual, divinely-inspired, even, Shen Yun contains themes, settings, and narratives that reflect long-held beliefs in heavenly beings.

Ahlden observed and appreciated Shen Yun’s spirituality, even in the way it was expressed in the program book. “The program reads almost like poetry, it really does, I love that. I read all of that [program] before. Not the Chinese part,” she said, laughing. “I’m loving it.”

“And the program helped me understand that it would be coming through like that. But it does, it’s very strong. You get their message. I was interested to find out where their schools are—in New York,” she said.

To Shen Yun’s artists, as they bring their mission of cultural revival around the world, Ahlden said, “Oh, I wish them well. I wish them very, very well.”

“They’ve been through a really bad time, and I realize that it still continues. Something like this brings everybody together,” she said. The bad time Ahlden is referring to is the fact that Shen Yun cannot perform in China today, the homeland of cultural origin, due to the violent and ongoing persecution of China’s traditional and spiritual way of life.

The communist regime carrying out this campaign of terror even tries to interfere with Shen Yun’s performances around the world. Shen Yun’s performance includes depictions of the reality of the persecution, as well as the compassion and faith that some spiritual followers in China exhibit in the face of brutality.

“The overall message? Peace,” Ahlden said. “I really feel that it was peace. And the fact that we’re all more alike than we’re different. Do you see what I mean? … If we can only relate better like that it would be a much better world, it really would.”

“Yes, it’s not all that hard [to do],” she continued. “Things like [Shen Yun] really help a lot, they really really do. I appreciate the opportunity. Thank you.”

With reporting by Catherine Wen and Brett Featherstone.