'It was divine… I am still under its spell' 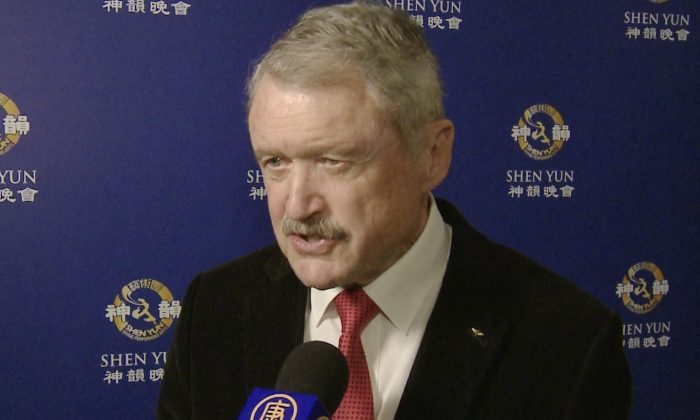 Peter Regli together with his wife and friends attends Shen Yun Performing Arts at Bâtiment des Forces Motrices in Geneva on Feb. 28, 2015. (Courtesy of NTD Television)

GENEVA—Peter Regli, former head of Swiss Intelligence, came all way from Bern to Geneva with his wife and friends “to see this sensational show.” It was the last Shen Yun Performing Arts presentation at Bâtiment des Forces Motrices in Geneva on Feb. 28, 2015.

Mr. Regli said he “was very impressed by the message that [Shen Yun artists] transmit—the message of understanding, tolerance, and respect for human rights.”

He explained why the message of the Shen Yun performance is important in Europe, the land of democracy.

I hope this performance will be a phenomenon and show the Europeans the way.
— Peter Regli
“We observe that socialism, totalitarian power is getting closer and closer to Europe.” In his opinion, “we have lost the will to defend our values.” Mr. Regli said in Switzerland, they believe in God.

So the themes he saw in Shen Yun prompted Mr. Regli to say “that we should also take a good look at our European values.”

Peter Regli said he hoped “that a large part of the spectators tonight was impressed by the colors, by the movements, by the precision of this demonstration, but if we have listened carefully, we would have also heard the message, very clear message about the values that we have. So I hope that this performance will be a phenomenon and show the Europeans the way.”

He also said that there was a “real message to Beijing: please respect human rights.” Shen Yun has two dances which describe human rights violations by the communist regime in modern China, and people who resist the regime with compassion and courage.

Mr. Regli said he has a great admiration for the young artists of Shen Yun.

Mr. Regli said he would like to extend “a big thank you to [Shen Yun artists] for these wonderful two hours they have offered us.”

He said that Shen Yun “has really touched my heart, my wife’s heart and the hearts of all my friends that are with us tonight and have followed us from Bern.”

Peter Regli said he regretted that there were only three performances in Geneva, and that [Shen Yun] was leaving Switzerland so quickly. “I am convinced that this is really unique, so all those who were not here tonight have really missed something.”

She is a managing director of a company that recruits doctors in France, Switzerland, and Eastern Europe.

Ms. Turudan said Shen Yun is “truly magnificent. The movements are harmonious … and each movement tells a story.”

According to the company’s website, “China’s deep cultural traditions are contained in classical Chinese dance, allowing its movements to be richly expressive, such that the personalities and feelings of characters can be portrayed with unparalleled clarity. It is therefore capable of depicting scenes from any time period, whether ancient or modern, Eastern or Western, in a strikingly vivid way.”

Ms. Turudan felt that “each movement transmits huge amounts of emotion and lots of energy too. There is a mixture of emotions, love, compassion and a huge amount of strength.”

She appreciated the hard work put into the performance. She praised “a very good choreographer who has taught the dancers remarkably well.”

She said that although she had already seen the performance, she found today “that there has been an evolution. It allows you simply to grow up. I think that the show teaches us to become better with our power and with our compassion, to be able to forgive others their errors.”