Swedish Count and Businessman: Shen Yun, ‘There Is Nothing Like It Anywhere’ 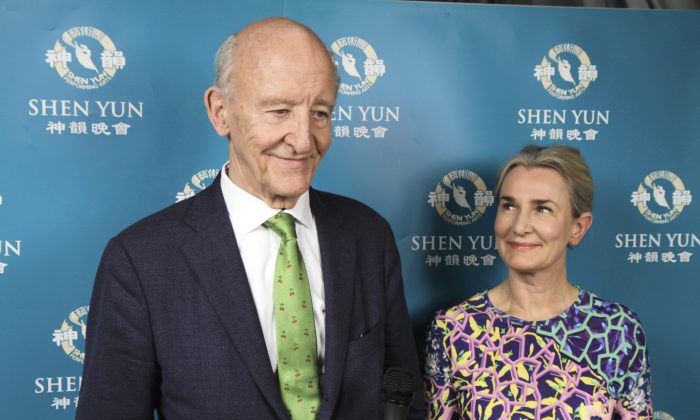 STOCKHOLM—Count Ian Wachtmeister and Mrs. Anna Wachtmeister enjoyed themselves at the final Shen Yun performance in Stockholm, on April 7.

Count Ian Wachtmeister was among the audience when Shen Yun gave their final performance in Stockholm on Tuesday, April 7. Mr. Wachtmeister is a famous face in Sweden, as a former party leader and government official for the New Democracy party in the 1990s and also as an author and a businessman, known for his strong opinions and wit.

“The lady who played the two-stringed instrument [erhu] was fascinating,” he said “We say that someone has ‘many strings to his bow’. She had only two strings, and she made the most amazing music.”

“I like how they combine these beautiful classical Western instruments with Chinese instruments,” she said. “It’s such a lovely combination. Very beautiful.”

“Shen Yun Symphony Orchestra blends the spirit of Chinese music with the power of a Western orchestra,” according to the Shen Yun website.

The classical Chinese instruments in the orchestra include, apart from the two-stringed erhu, the pipa (Chinese lute) and the playful woodwind instrument suona.

“[It’s a] story about faith, what it does, who you believe in, what you hope for. And as long as you don’t give up, you’ll make it to Heaven, or whatever that place is,” he said.

Mr. Wachtmeister also expressed disbelief over the fact that Shen Yun Performing Arts is not allowed to perform in China.

According to the Shen Yun website, traditional Chinese culture is rooted in spirituality. Chinese society was deeply influenced by Buddhism, Daoism and Confucianism, but the Chinese Communist Party has attempted to systematically eradicate China’s old culture and force atheism upon the people.

Some of Shen Yun Performing Arts’ dance numbers are like short dramas, with historical legends as well as tales from today’s China, depicting how the Falun Dafa spiritual practice is being persecuted.

Mr. Wachtmeister said he couldn’t understand why this persecution is happening. “Here’s what I think: There are so many nasty things going on in our world. How could you possibly be afraid of people who have this faith?”

Mrs. Wachtmeister agreed: “How is that threatening? I don’t understand it. It’s just a beautiful thing.”

Mr. Wachtmeister continued: “Almost everything happening in the world today is dangerous, but this is completely harmless. It makes you wonder; if you’re afraid of this, you have to be very scared in general. I think it says more about the person who’s afraid, that powerful person who is afraid of this.”

He added that he has been to China three times himself, to Hong Kong, Beijing and Shanghai, while Mrs. Wachtmeister has never been there.

“I would love to go there,” she said. “It would be great. But we get to enjoy this beautiful art [Shen Yun] here instead, not in China.”

For anyone who hasn’t seen Shen Yun perform, Mr. Wachtmeister had this message:

“Go see it. There is nothing like it anywhere.”