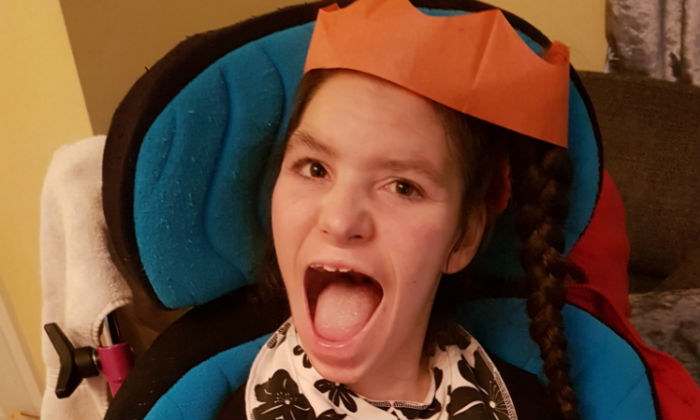 An appeal to find 16-year-old Miya Thirlby's speaking device has been shared by sports stars and celebrities. (JustGiving)
UK

A father of a disabled girl who can no longer communicate after thieves stole her vital speech machine has been overwhelmed by how fast the story has been shared across the world.

The appeal has been shared by British football legend Alan Shearer and tennis champion Andy Murray and has been retweeted over 68,000 times.

I’ll donate a £1000 now towards a new one for ya, get it touch wiv us Love GAZZA xxxx https://t.co/XgUKRL2NZU

The original tweet was written by Paul Johnson, the father of 16-year-old Miya Thirlby who has cerebral palsy and epilepsy.

He wrote: “Can everyone who sees this retweet this please. My daughter had her speech machine stolen out of the car. Its her only way of communicating with us. It was very pricey so it cant be easily replaced. Poor girl now cant speak to us again!!”

Can everyone who sees this retweet this please. My daughter had her speech machine stolen out of the car. Its her only way of communicating with us. It was very pricey so it cant be easily replaced. Poor girl now cant speak to us again!! #Nufc #getmiyasvoiceback #help #plymouth pic.twitter.com/7p9tTSMTWC

The appeal is hashtagged #getmiyasvoiceback.

“The reaction has been nuts. It’s quite overwhelming,” Johnson told the Mirror. “It restores your faith in human nature.”

In an interview with the Plymouth Herald, Miya’s mother, Kerrie Thirlby has been touched by the outpour of support on social media.

“We are in shock, it’s crazy but amazing to see how caring people are. Paul is a huge Alan Shearer fan, he’s a Geordie. He’s amazed and Alan messaged him too asking Paul to keep him updated,” she said.

Come on man. Do the decent thing and please somehow get the machine back to this little girl. ???? https://t.co/17fqu8Znla

Thieves stole the talking aid from the family’s car between Jan. 8 and 9, the newspaper reported.

“I’m not holding out much hope they’re going to be the kind of people that have a conscience,” Thirlby said.

She believes the person who stole the computer might have thought it was a normal computer as it was in a laptop bag. The device is specially adapted to work with Miya’s eyes.

In a Facebook post, Thirlby wrote: “Please help!! Miya’s eyegaze (talking aid) has been stolen from our car they prob thought it was a laptop,if anyone sees it around or hears of someone with this please message me,I’m so angry and upset! We fundraised to get her this so she can communicate with us and they’re very expensive his was taken from cherry tree gardens so could be around Pennycross area”

Miya’s father told the Herald, “Plymouth is not that big and word has spread so I am pretty sure the people who did this will know by now.

“It’s looking doubtful we will get it back but you never know,” he said.