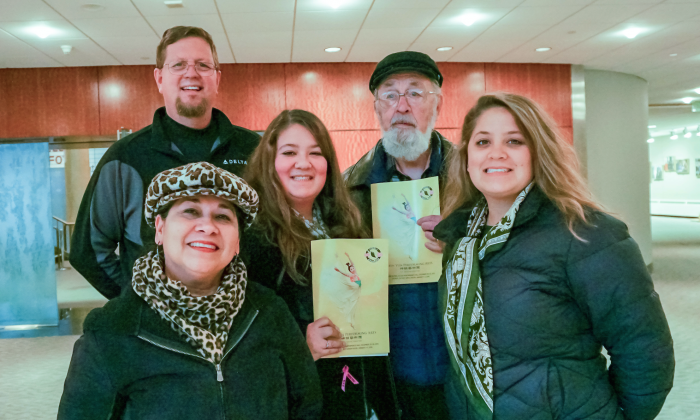 GRAND RAPIDS, Mich.—Famed artists of the Western canon like Michelangelo and Beethoven were not the only ones to look to the divine for artistic inspiration. Since the beginnings of human civilization, cultures around the world have used art to express faith and veneration for the divine as well as to uplift and inspire audiences of their art.

Shen Yun Performing Arts follows this tradition with a performance of classical Chinese dance and music that celebrates the divine with themes of hope and harmony between heaven and earth, a connection between humans and the gods. These are beliefs that come from traditional Chinese culture.

After seeing New York-based Shen Yun at the DeVos Performance Hall on Dec. 30, the Vandervelde family was touched by the spiritual message of Shen Yun, which they said transcended cultural and religious boundaries to offer an uplifting message to audiences from all walks of life.

The family praised various aspects of the performance—from the dancing to the orchestra to the vibrant costumes—but what struck the family the most was the spirituality and veneration towards the divine embedded throughout the program.

Dan Vandervelde, a Christian church pastor, particularly enjoyed noticing the commonalities between the faith of the artists and his own beliefs.

“We believe in the harmony of the heaven and the earth too and that the divine was the Creator,” he said.

He especially enjoyed the soprano, who sang about the creation of humankind in a song that “wholeheartedly” resonated with Mr. Vandervelde. “It was beautiful that they were able to stand out and say that without any apology, but also do so artistically. So it was not just an offensive statement, but done in harmony with the whole program,” he said.

Sara Vandervelde, a Spanish-English translator, noted the similarities between Falun Dafa, an ancient Chinese cultivation practice, and her own faith. “I found that there was common ground,” she said, and she felt that this message of spirituality and faith in the divine gave audiences a sense of hope.

Mr. Vandervelde, who recently returned to school to study international development, hoped that the performance would promote cultural exchanges. “I hope that the Western audience doesn’t just take [Shen Yun] as a beautiful dance production,” but also begin to understand Chinese culture and promote unity between peoples, he said.

Instead of focusing on the differences, he hoped people would notice the similarities and “open up their hearts to China.”

Shen Yun, a New York-based performing arts company, brings China’s rich cultural heritage and traditional values to audiences worldwide every year. The company’s four touring companies will travel to over 100 cities across the globe for this season’s world tour. The company thus serves as a popular platform for spreading cultural awareness. What is especially unique about Shen Yun is its orchestra, which combines a Western orchestra with traditional Chinese instruments to create an innovative and refreshing sound that perfectly exemplifies this spirit of intercultural harmony and exchange.

Sara Vandervelde, who shares the same name as her mother who also attended the performance, perfectly summarized what she saw as the essence of Shen Yun. “Heaven and earth coming together. Western and Eastern coming together,” she said.