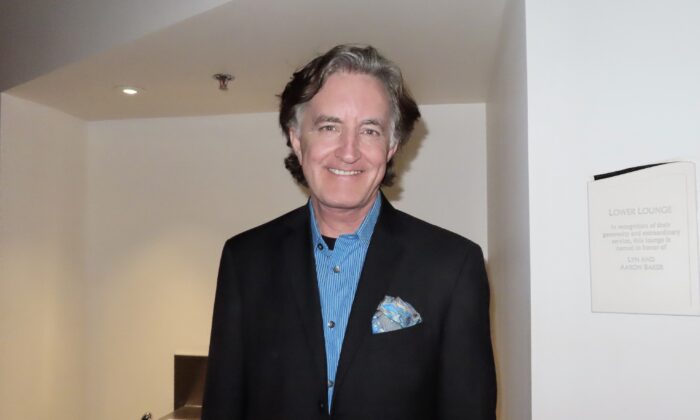 SAN LUIS OBISPO, Calif.—Music composer Timothy Hosman was in for a surprise when he came to watch Shen Yun Performing Arts at the Performing Arts Center in San Luis Obispo.

Shen Yun is on a worldwide mission to bring back the authentic Chinese traditional culture which existed in the pre-communist era. It is delighting its audiences with a repertoire of story-based classical and folk dances and music.

Mr. Hosman had just returned from China where he had completed an important project.

“I’ve been so impressed with the orchestra. It sounds fantastic. And they have … the erhu and the pipa and all the different [traditional] instruments that I’m really familiar with, and they’re so in tune,” said Mr. Hosman.

“I kept on telling my wife that’s live music … because it sounds so good and so in tune and well played,” he said.

Shen Yun was astounding in every way, said Mr. Hosman.

“It’s all amazing the way [the actors] interact with the video. I’m still confused at how precise that is,” he said. He had never seen anything like it before, referring to the company’s dynamic digital technology.

“I can’t figure out how they did it. Because it’s exact. I mean, the timing is in fact is incredible,” he said.

Shen Yun’s dances depict many aspects of China’s original culture including cherished fairy tales, stories teaching moral values, and humorous legends. They also depict the current persecution of Falun Dafa, a peaceful spiritual practice based on the values of truthfulness, compassion, and tolerance.

The portrayal was “very moving,” he said. He also commended the performers.

“I’m this proud of all of them. They’re doing an amazing job. They really are. [I’m] glad to be here,” he said.

It’s a miracle that we are here watching Shen Yun, said Neil Karwath, a registered nurse. He was accompanied by his wife Esther.

Mr. Karwath had booked tickets but halfway through the performance he and his wife were asked to leave. They found they had actually bought tickets for the previous day’s performance. The couple was devastated but good luck stepped in as the theatre staff stepped up and found them seats near the orchestra in what was a full house.

It was a powerful performance, said Mr. Karwath. The color and the light were remarkable. “It really enhanced the movement, also drew me into the story and message. Not only that, the philosophy moves the heart and moves the spirit.”

“I felt extremely moved, moved to do something, something more. Not sit on the sideline,” he said.

Chinese traditional society was based on teachings that were believed to have been passed from heavenly beings to earthly mortals.

“I’m really moved to do research, and honestly become a supporter in whatever way I can, because [the performance] is just that moving. It’s a powerful message. The whole purpose, the whole philosophy, the whole story is all genuine. That’s unique in this day and age. I think it resonates with people who are genuine people and who care,” said Mr. Karwath.

Mr. Karwath’s wife, Esther, said she appreciated the urgency of the performance that also connected with her on a spiritual level.

“What I really loved about [Shen Yun is that] you can sense the drive,” she said. “There is an urgency. There is a real subtle way to bring a message but in a surrounding of celebration of life,” she said.