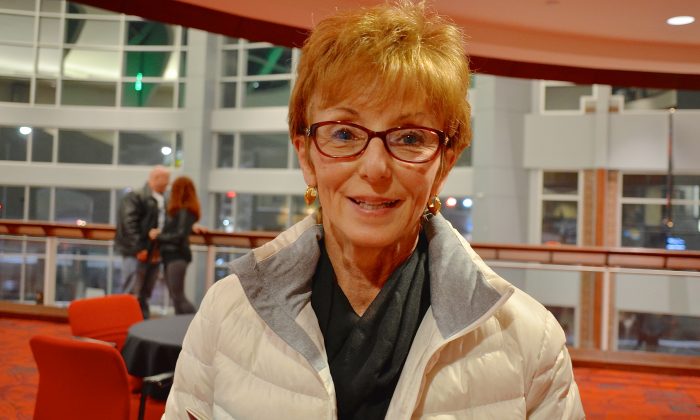 APPLETON, Wisconsin—Shen Yun Performing Arts with its ninth year of touring the globe to more than 200 cities has a mission to revitalize 5,000 years of Chinese civilization through the performing arts.

The reaction from people attending the first ever performance of Shen Yun in Appleton, Wisc. was heartfelt appreciation for the rare chance to witness genuine Chinese culture in America. The performance was at the Fox Cities Performing Arts Center on March 3.

“Through the universal language of music and dance, Shen Yun weaves a wondrous tapestry of heavenly realms, ancient legends, and modern heroic tales … of 5,000 years of Chinese culture,” states the Shen Yun website.

“I thank [Shen Yun] for bringing this to us,” said Jackie Schoenborn. “I love the show and the dancing, of course. But the main thing for me was the philosophy – the peace [and] love of God that was brought out in the show. It opened up my eyes to the Chinese culture.”

Shen Yun is based in New York and, thus, has the freedom to express this culture to its fullest extent. This show cannot be seen in mainland China. “Forcing atheism upon society, the Chinese Communist Party has for decades launched various campaigns—most notably the Cultural Revolution—to destroy not only cultural sites, temples, and relics, but also the Chinese people’s belief in virtue and faith in the divine,” states Shen Yun website.

Many people are amazed to learn from Shen Yun of the spiritual nature of traditional Chinese culture. According to the Shen Yun website, its origins come from Confucianism, Buddhism, and Taoism with such principles as benevolence and justice, propriety and wisdom, respect for the heavens, and divine retribution.

” God is love, and that’s what they brought out in the show. I was very, very impressed,” said Ms. Schoenborn, a retired jeweler in a fourth generation family business, Bob Schoenborn’s Jewelry.

“I loved the ending—it was beautiful. It just sealed the whole program,” she said.

Liz Schroeder, nuclear power plant worker, was also most appreciative of Shen Yun and said that the show was fantastic.

“I always like to understand other cultures and traditions. It’s wonderful that a group like Shen Yun can be in America and express traditional culture of the Chinese,” she said.

Another musical feature of the Shen Yun Orchestra are the award-winning vocalists. “Their ability to perform bel canto [singing] while retaining perfect Chinese diction is unparalleled,” states the Shen Yun website. Projected behind the singers are the lyrics they are singing in both Chinese and English.

“I need to say that the soloists were above and beyond. They really got me,” said Ms. Schroeder.

Ms. Schroeder also was astonished about the persecution in China of a traditional meditation group.

“It was amazing to me to learn that someone can still be persecuted for meditating. I meditate every night, and I try to in the morning,” said Ms. Schroeder.

She elaborated: “Hearing that and seeing that portrayed … and beautiful dance, beautiful vocals, and beautiful everything—it was simply amazing. I would be back and definitely recommend anyone to inform themselves of the Chinese culture.”

Mark Kruger, retired from installing engineering equipment, said the performance was much more impressive than the Internet trailers he saw. He particularly enjoyed the use of the animated digital backdrops that interacted with the performers and took the audience to far away places and times. “That I wasn’t expecting,” he said.

Carol Kruger is a retired ballet costume seamstress for the Central Wisconsin Ballet also saw the performance. She was very impressed with the costumes. “I would just love to get over there and study the costume making. It is just unbelievable.”

The dancers handmade attire go hand-in-hand with the presentation of traditional culture. Shen Yun’s costume artists collect countless designs of traditional attire, ranging from those of emperors … to the common people. The designers stress harmonic balance and contrast,” states the Shen Yun website.

“I love all of it,” explained Mrs. Kruger. “I can’t wait until the second half. The only thing I’m upset about is that our daughter is not here. … She’s a ballet dancer.”