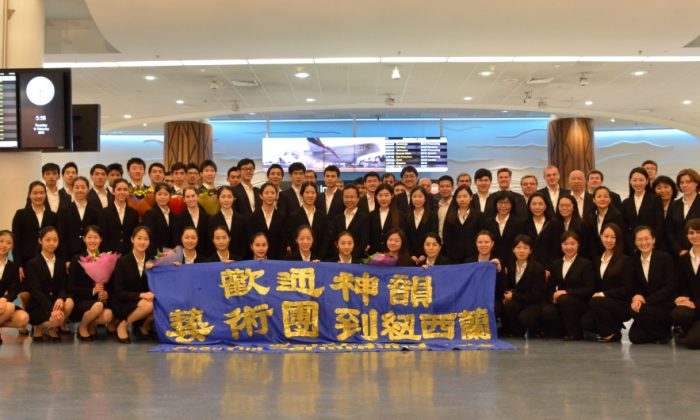 NEW ZEALAND—Shen Yun arrived to a New Zealand style heatwave which continued throughout their stay in both Auckland and Wellington. The performance certainly had a calming effect, not only on the weather, but also on the audience.

Shen Yun performed in both Auckland and Wellington from Feb. 12 to Feb. 16. with seven performances in all.

Audience members, who came from all walks of life, were amazed at the diversity of the performance, which took them on a magical journey through the 5,000 years of ancient Chinese history. Many people were deeply touched by some of the messages portrayed in the performance.

Laura Jones and Mac Hopper, ballet dancers with the Royal New Zealand Ballet, thoroughly enjoyed the performance. Mr. Hopper was tempted to leap onto the stage with the Shen Yun dancers as he was so immersed in the production. “It transports you into a different world,”

“You feel like you’re right there on stage with them, dancing around in their formations.”

Although Max Shierlaw, Lower Hutt City councillor, had seen the performance twice before he was still enchanted with what he saw, “It’s really spectacular, the costumes are just fantastic, the performers are just so diverse and the athleticism,” he said.

Kory Juul, acclaimed visual effects artist, director, and martial artist, was captivated by the Shen Yun’s use of visual elements and how the digital backdrop made the performances “dynamic.”

He added that the use of the backdrop that interacted with the dances was very entertaining and helped people connect and better understand the ancient Chinese culture.

Retired Legal Secretary, Janice Bell attended Shen Yun at the St. James Theatre in Wellington on Feb. 17 and was overcome with emotion. There were so many aspects of the performance that touched her heart.

“The colors were extraordinary! they’re beautiful! The cues and the movement, like everything, it was perfect, perfect dance. “It is just the most beautiful performance of any classical dance I’ve ever seen.

“It really touches the spirit of anyone who’s watching to a certain level—It’s just really beautiful.”

Ms. Bell was also moved by the the combined Eastern and Western style orchestra. It is the only orchestra in the world which combines ancient Chinese instruments with Western instruments on a permanent basis, resulting in a new mesmerising sound.

“I will remember this for ever, she said.

Shen Yun Is Enchanting and Informativ

Barry Wilson, a lawyer and previously a television and radio reporter, attended the Shen Yun performance on Feb. 14 at the Aotea Centre, ASB Theatre in Auckland.

“Artistically it was quite superb and it’s very vibrant, it’s very colourful, technically it’s quite brilliant. It’s an enchanting [performance],” he said.

Mr. Wilson expressed his dismay that Shen Yun are unable to perform in China.

Shen Yun has graced some of the world’s most prestigious theatres, touching the hearts of millions. Four performance companies tour simultaneously throughout the world to date they have performed in over 100 countries.

“I think it’s a shame that the Chinese communist regime doesn’t allow this kind of traditional show to be presented in China. That is a tragedy because the Chinese people, like other people, should have a chance to see what’s happened in the past.”

“We live in a free society where people can express themselves. Those kinds of ideas couldn’t be expressed in artistic terms in China, could they?—They’d be oppressed.”

“I think the only way people will know about what is going on is for it to be publicised. Shen Yun is one way of being able to do that.”

Mr. Wilson thought that the message that came across was one of suppression but overall it was a message of power, “I thought that was positive.”

“It’s [a] skilled and integrated performance,” he said.

With reporting by Margo MacVicar