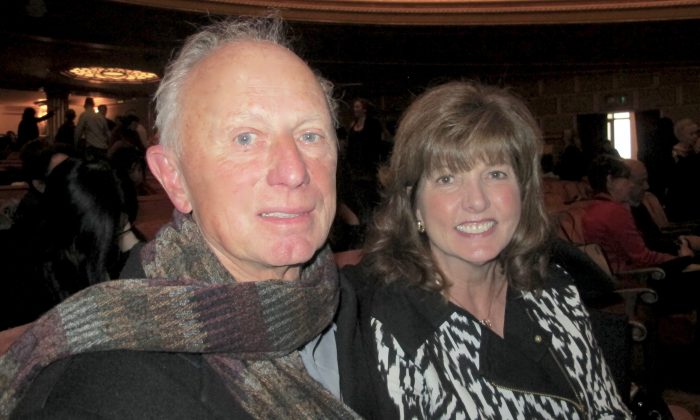 Mrs. Hunter’s love of dance brought them to the afternoon performance at the San Francisco War Memorial Opera House.

Mr. Hunter expected the performance to be okay. “But it is much more than that,” he said.

“I thought it was very interesting. All of it, really. … I wanted to see more,” he said.

It’s like it comes from your soul.
— Connie Hunter,

“They’re very talented,” she said. “It’s like it comes from your soul.”

Shen Yun’s website explains that classical Chinese dance is a comprehensive dance system thousands of years old and “rich with expressive power,” allowing the dancers to convey thoughts and emotions.

“I love dance, and they sure do it well,” said Mrs. Hunter. “I like everything about it.”

She appreciated the costumes and the choreography, which work together onstage to create a brilliantly-colored visual display. She also enjoyed Shen Yun’s unique live orchestra that blends Eastern and Western musical traditions.

The performers use dance and music to express traditional values such as compassion, wisdom, and respect for the divine.

She could see the 5,000 years of history in their dance movements and music.

In Shen Yun, she found “humbleness, peacefulness, [and] understanding.” Watching Shen Yun made her feel “at peace,” she said.

“Relaxed, peaceful, and just happy,” she said. “This makes you feel happy.”