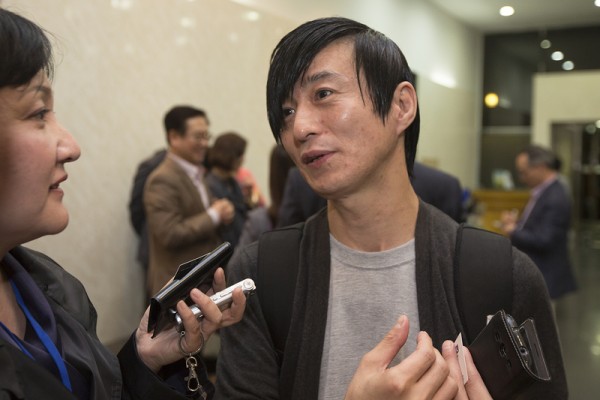 SUWON, South Korea—The lobby of Gyeonggi Arts Center was jam packed on the evening of May 10. Shen Yun’s previous performances at KBS Hall in Seoul was arbitrarily canceled by KBS, possibly due to the threats made by the Chinese diplomats. These threats have happened before because some of Shen Yun’s programs are inspired by a spiritual discipline, Falun Gong, which is currently persecuted in China. As a result some of the ticket holders of the canceled shows rushed to Gyeonggi Arts Center to watch Shen Yun’s last show in South Korea.

Mr. Jeim Yi was one of them, and he happened to work as a general art director for KBS, one of the largest national television networks. He was more than happy to have traveled all this way.

“I am so glad that I came. Shen Yun is a dreamland gifted to me by Heaven,” Mr. Yi said, “I feel the energy from gods during the performance. I am very satisfied.”

Inspired by the performance, Mr. Yi believed that Shen Yun’s messages to revive China’s 5,000 years of divinely inspired culture and promote moral elevation would prove pivotal to Korea’s television shows. “Shen Yun was able to give its audiences so much in such a short time. It allows us to understand traditional Chinese culture and at the same time brings us great joy,” Mr. Yi said.

Mr. Yi had made up his mind, “At work I would like to do something to promote and revive traditional Korean culture.” He believed that if he could learn from Shen Yun and use some of its ideas in the programs he makes, “I will be able to tell more audiences about our traditional culture. I think Shen Yun has put me on a new start (to my career)!”

Being an art director himself, Mr. Yi was grateful to Shen Yun’s art director for the masterpiece created. He said, “Shen Yun brought me so many ideas and endowed me with a gift of unlimited imagination.”

He described how he felt that Shen Yun had the best music, dance, and color scheme: “I was caught off guard by how intricately everything was put together.”

“The perfection presented by Shen Yun’s artists are bound to inspire other performers to better their techniques,” he said.

When talking about KBS canceling Shen Yun’s shows in Seoul, Mr. Yi was disappointed and saddened at the same time. “As a KBS employee, I am not happy. KBS violated the freedom of artistic expression and infringed its audiences’ rights.” He wanted more people to know about this infamous action of KBS “so that this won’t happen again.”