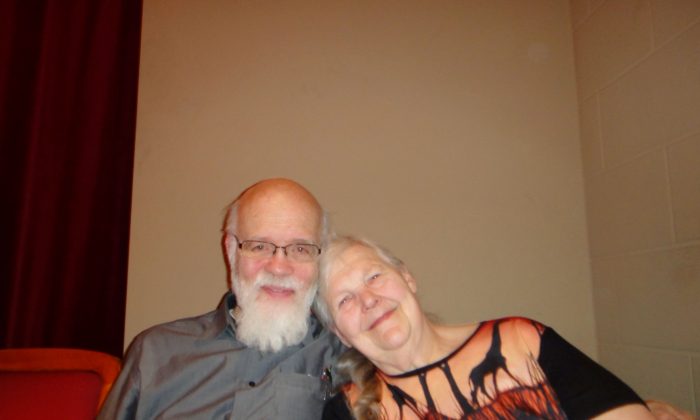 Music teachers Mike and Cecilia Foltz found inspiration and hope in Shen Yun on May 6, 2016 at Kitchener-Waterloo's Centre In The Square. (Dongyu Teng/Epoch Times)
Canada

KITCHENER-WATERLOO, Canada—Shen Yun Performing Arts returned to Centre In The Square on May 6 this year with a program filled with beauty, hope and grace.

In the audience that night were music teachers Mike and Cecilia Foltz. Mr. Foltz is a piano and organ teacher, while his wife teaches piano, violin and vocal music.

“Wonderful—it’s amazing,” said Mr. Foltz, who said Shen Yun put him in touch with his spirit.

The world’s premier classical Chinese dance and music company, Shen Yun was established in 2006 with the mission of reviving China’s 5,000 years of divinely inspired civilization. The company features performances of classical Chinese dance, one of the most comprehensive dance systems in the world, perfected and refined throughout China’s long history.

“The performers really knew what they were doing. They told the story through their dance … you were right on stage with them. Just beautiful,” said Ms. Foltz.

The couple was impressed by Shen Yun’s singers and orchestra as well, noting that everybody performed from their heart.

“We loved all of it,” they each said.

For both of them, the spiritual aspect of the performance was very important.

“Amazing. I read about it, but I think that until you experience it, you don’t really understand. It puts you in touch with something that we don’t see enough of in our society,” said Mr. Foltz.

For the couple who recently experienced a personal tragedy, seeing Shen Yun was a blessing.

“I think it really hit home that the Creator created us and that we all go back to the Creator. Our grandchild was 7.5 months old and she died on April 26, so that brings the spirituality of life into it, and I think that it helps me with the death of my grandchild,” said Ms. Foltz. She said that the performance gave her hope for the future.

Ms. Foltz also hoped that Chinese people who are still experiencing persecution in their country would get peace.

“That’s what I feel is coming,” she said.

Her husband believes Shen Yun is helping achieve this.

“They are wonderful ambassadors,” he said.

Mr. Foltz also noted he felt “a deep sense of gratitude” after seeing the performance.

“The show took you through all different kinds of emotions, and at the end you’re very happy.

“It gives you a feeling that you want to try to find the best way for yourself, something that we need to work on all through our lives,” he said.

In this respect, he believes spirituality is essential.

“We all have our own way and need to find our own way, but we need to be in touch with our Creator as well because that helps us understand who we are and why we’re here. That’s something that’s really important and I think many people think that they are here for themselves, and I think we have to stop and look and listen and think and understand that there’s more to it than that,” he said.

His wife said she is now leaving the performance with a feeling of calmness.

“Would love to see it again,” Mr. Foltz noted.

Also in the audience that night was Joe Curto, a manager of commercial credit, alongside his wife, daughter and parents.

“It’s building-the storyline keeps building. It builds on culture, it builds on what they went through, it builds on the hardships and good times, and even spiritually too, so it’s good. It’s very nice,” he said.

That night, Eddie Sanchez, a retired civil engineer, was seeing Shen Yun for the second time.

“I feel inspired and I feel rejuvenated, and I feel so much pride in what human beings can do, especially the Chinese culture,” Mr. Sanchez said.

“Since ancient times, China has been known as the ‘Celestial Empire,'” according to Shen Yun’s website. This refers to a belief that the divine transmitted a rich culture to the Chinese people.

It is Shen Yun’s mission to bring back this glorious culture that has been suppressed and nearly eliminated by the communist regime in China.

Mr. Sanchez also took a message of hope for the future from the show. He feels that just focusing on the present is limiting.

“If we look at the future with hope, we are always on the move and life is motion,”

“We have to move. Life is motion, life is activity, and life is spiritual,” he said.