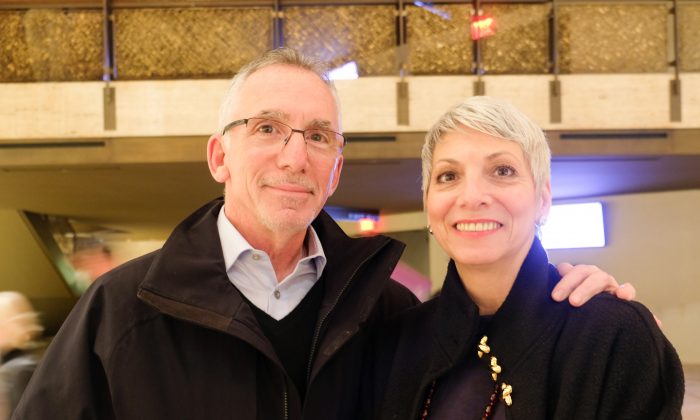 NEW YORK—Steven and Felicia Baruch walked out of Shen Yun Performing Arts still marveling at the otherworldly beauty they saw. It was unlike any other stage production they had ever seen, and unlike anything they could find in everyday life.

“Visually spectacular, visually spectacular,” said Mr. Baruch, president of an apparel manufacturing company. “It brought everything in, it brought the visuals, the music, the dance, the choreography, and all of those components were brought into the performance. It was—at times it was powerful too.”

There were light-hearted and heavy topics alike, done in an uplifting and artistic way that brought the couple through a range of emotions.

“A must-see, definitely a must-see,” Mrs. Baruch added. “It just brings a perspective to life. It actually brings a beauty that you don’t see in an everyday life, you don’t. And like Steve said, the whole package is spectacular.”

The Baruchs were at Lincoln Center for the March 9 evening performance of Shen Yun, which aims to bring 5,000 years of Chinese civilization to life on screen.

“The overall ability of the people that were in the performance, and the music of course was terrific. I felt the, how the music tied into the whole visual performance was really great,” Mr. Baruch said.

Mrs. Baruch had high praise for the artists as well.

“The ability of the performers to perform at the level that they perform at, it’s just mind blowing,” she said.

“The costumes, the back screen with all the graphics, everything’s just beautifully done. Spectacular. I mean I loved every minute of it. The music, the dancing, the costumes, were spectacular. I think that the performers are at a level that I’ve never seen before. They are amazing. Absolutely amazing.”

Many audience members tend to be impressed with New York-based Shen Yun’s costumes, which allow the performers to transform into emperors and deities, into monks or fairies or people from various Chinese dynasties and regions.

Traditional Chinese garb is said to be inspired by the heavenly robes, with every pattern having some meaning tied to the divine. The ancient Chinese culture is a spiritual one, and that is reflected even in the clothing.

“The fabrics, the fluidity of them [in “Fairies of the Clouds”], those blue scarves and the sleeves. It’s just amazing, and whoever designs the costumes very creative,” Mrs. Baruch said. “The colors, the fluidity, the lines. … It’s just very fluid and it’s just easy for the eye.”

Mr. Baruch said the flow of the program was impressive as well, as the stories and dances took the audience from the very beginning of Chinese civilization all the way up to the present day.

Throughout the performance, audience members learn, and some for the first time, that Shen Yun is not allowed to perform in China. The traditional, 5,000-year culture that Shen Yun seeks to revive is the very same that the communist regime in China has systemically tried to uproot over the past 70 years.

But some of the modern-day vignettes show how people today yearn to return to their traditions and spiritual roots.

“I think the one that I liked most was that one with the meditation,” Mrs. Baruch said. “Because it’s so far removed from what our culture is about.”

It was a wonder for her to see “someone to practice something that’s soul-searching and religious, and it’s special for them,” she said.

It was also a shock to learn that people who want to follow their faith can be arrested and persecuted in China by the communist regime.

The story shows the reality of China today, but is ultimately one of hope. The program describes the story as one of good and evil, and as the characters take a path of renewal and hope.

“It carried from the very, very start of the beginning of Chinese culture and brought it all the way through to today, and I thought it was really well done,” Mr. Baruch said.