Shen Yun Brings Out the Goodness in People at Daegu 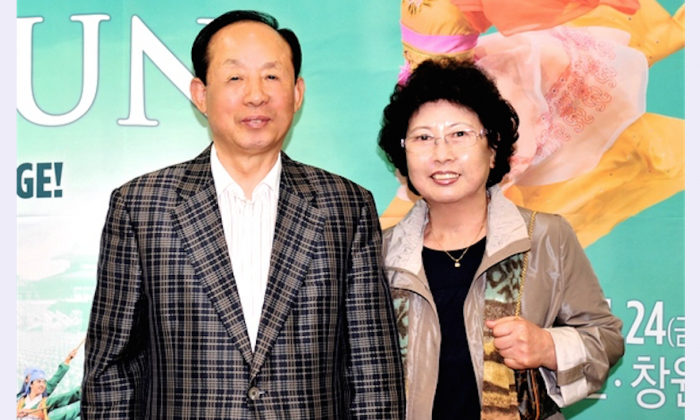 “This performance is very different. It has profound messages and calls on people to be truthful and compassionate. Very touching,” said Lee Sangcheol, president of TSP Corporation, a company that makes electronic components.

At the heart of a Shen Yun performance is a will to convey principles such as compassion, propriety, justice, filial piety, and respect for the divine—values Shen Yun upholds are the essence of traditional Chinese culture.

Two messages Mr. Lee received from the exhilarating presentation were, ‘a reward for any virtuous deed’ and ‘truthfulness, compassion and forbearance.’ These messages encouraged people to be good, follow moral virtues and do good deeds, Mr. Lee said.

Inspired by story-dances, The Fable of the Magic Brush and Mighty Monk, Mr. Lee said, “Any person with a compassionate heart, regardless of his faith, whether it is Buddhism or any other religion, will follow the will of Heaven and advocate goodness and restrain evil.”

In The Fable of the Magic Brush, as the artist paints, his drawings spring to life, as for Mighty Monk, after showing sincerity a junior monk is granted strength and supernatural power by a heavenly warrior, the program book explains.

Mr. Lee was also captured by the story-dance Snow-Capped Celebration as Tibetan men joyfully dance to a zestful song, according to the Shen Yun program book.

“I have taken trips to many parts of China, but I have never been to Tibet,” said Mr. Lee. “So the Tibetan program made quite an impression on me.”

Mr. Lee said he would promote Shen Yun through his company.

“If only my employees could go to see Shen Yun, it would do wonders to the company’s culture, and would also be a good opportunity to learn about moral virtues,” he said.

According to a Western-style painter, Jung Sukmi, the contrast between goodness and evil is very vivid, she said.

“Whilst evil-doers will certainly end in failure, people should do more good with their lives, lead an honest life and be ready to devote to good causes.”

Ms. Jung was also inspired by a Shen Yun message she grasped through the story-dance, The Fable of the Magic Brush, as well.

“I am going to cultivate my heart and mind so I too will have a pure mind when I paint.”

As a professional artist, Ms. Jung added, Shen Yun’s use of color “is simply magnificent” and she found an interesting fact that primary colors were frequently used in ancient Chinese culture.

“Shen Yun is going to rebuild a spiritually-based civilization. I just see a perfect union between the Shen Yun background with the dances on stage. It is very interesting how modern technology is used to bring forth traditional culture,” he said.

Shen Yun features a one-of-a-kind animated background to present scenes from heavenly paradises to the snow-capped Himalayas, giving audiences an insight into 5,000 years of Chinese history.

“The performances are truly remarkable in telling a story and vividly conveying different messages,” he said.