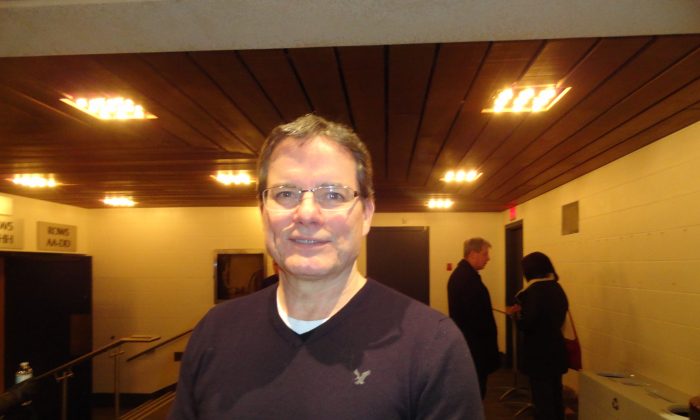 Ben McCarl, a sculptor and painter, saw the show for the first time and was impressed.

Mr. McCarl has been sculpting and painting for many years and has some of his works on display at the Guelph Public Library and the Guelph Youth Music Centre. He has a passion for the arts and their ability to bring people together. He has held workshops where dozens of people contribute to the creation of a single sculpture.

Mr. McCarl came to the show on the recommendation of his father-in-law who suggested he might enjoy the performance.

Attending the performance without any expectations, Mr. McCarl said he was surprised and impressed with the level of artistry in Shen Yun’s production.

Shen Yun is the world’s foremost classical Chinese dance company and since its inception in 2006, the group has become a global ambassador of traditional Chinese culture.

Mr. McCarl was amazed by the dancers’ skills, noting “how high they can jump, how smooth they are, how they can float across the stage without moving anything except their feet.”

Classical Chinese dance is a vast system of dance with a 5,000-year history that incorporates hundreds of unique postures and movements as well as difficult flips and tumbling techniques.

Another standout aspect of the performance for Mr. McCarl was Shen Yun’s orchestra, a unique ensemble that blends Eastern and Western instruments together to create a sound that is at once exotic and familiar. “It’s wonderful to hear the difference between them,” said Mr. McCarl referring to the two instrumental traditions.

In, addition to the orchestra, Shen Yun incorporates solo singers who perform in the traditional bel canto style.

“I particularly liked the soloists,” said Mr. McCarl. “I had no expectations and I was amazed at how well they performed.”

“I am emotional and I like music so I tend to feel it twice as much as other people,” he added.

“I was surprised and pleased with the way they tied together, the screen performance,” he said. “It was so seamless I was surprised at how smooth that happened. It must have taken a lot of effort to choreograph it, to get it timed just perfect.”