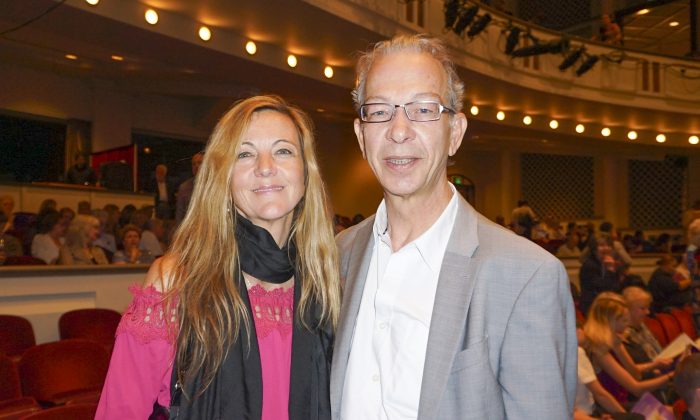 ST. PETERSBURG, Fla.—Shen Yun translates into something like “the beauty of divine beings dancing,” and on Thursday evening, Feb. 22, Douglas Nelson and Cordelia Tomking felt that was exactly what they experienced at the Mahaffey Theater.

New York-based Shen Yun Performing Arts is the world’s premier classical Chinese dance company. Formed in 2006 by artists who wanted to revive the authentic traditional Chinese culture that has been lost under modern communist rule in China, the company burgeoned from one to six equal sized groups in just a few years and is now a global phenomenon.

For Nelson, a physician, the profound spirituality he saw in this performance about a civilization once known to be divinely inspired was not a surprise. Nelson is interested in qigong and other traditional Chinese arts, and was thrilled to learn more about this culture centered around the idea of harmony between heaven, earth, and humankind.

It turns out, all of the performers practice a qigong-like spiritual meditation as well.

As the program explains, Shen Yun artists believe in cultivating both the mind and body. Art was traditionally meant to uplift and inspire, and the performers aim to do so with every note and every gesture on stage. These Shen Yun artists find their inspiration in Falun Dafa, which is centered around the three principles of truthfulness, compassion, and tolerance.

“I am happy that is connected with this expression of traditional Chinese culture,” Nelson said. “I think it needs to be brought out and there and made more prominent to the world. It’ a real gift to be able to experience this.”

Nelson praised the beauty of the performance, and the innovative way 3-D animation and technology was used to bring the audience right in to ancient legends and worlds. The immersive experience brought him joy, and even more so when he saw the performers’ beliefs shine through—as they resonated with what Nelson strives to adhere to as well.

“It’s something I pursue every day,” he said.

Nelson was so moved by the performance that after he shared his thoughts during the intermission, and saw the second half of the performance, he had more to share. He followed up with The Epoch Times reporter via email to clarify his thoughts.

“The feeling was much stronger after I had seen the entire production,” Nelson wrote. “All of the music, dance, and choreography were magnificent, and the performances were flawless. The innovative 3-D projection allowed the intended essence and meaning of the entire production to become clear.”

Nelson was in complete awe at the finale, which he said left him “inspired and thrilled by it.”

In the last piece of the performance, the spirit of traditional Chinese culture was brought into the present day with a piece set in modern China. It inspired deep reflection in Nelson, which he wanted to share.

“How will we achieve the goal of goodness in the face of evil?” he asked. As a physician, he deals with ailments daily, and sees the great necessity of both internal and external discipline in order to maintain health. The feelings left from the performers gave him a reminder to, like the performers, practice meditation to produce “refinement of character.”

“The more time and energy devoted to these practices, the freer we can become from ‘modern trends’ which destroy our humanity. Falun Dafa practices offer a real solution to modern ailments,” he wrote.

He also wanted to congratulate the performers, and extend a message to them:

“This is very important work that you are doing, and it is a great gift to the world that you are sharing China’s unique heritage. The message you are conveying to the world is of paramount importance. Across all cultures and racial groups, we have a common Divine Source and we are compelled to follow a Divine Plan. Through goodness in the face of evil, we will fulfil our sacred vows, reuniting and ascending anew!” he wrote.