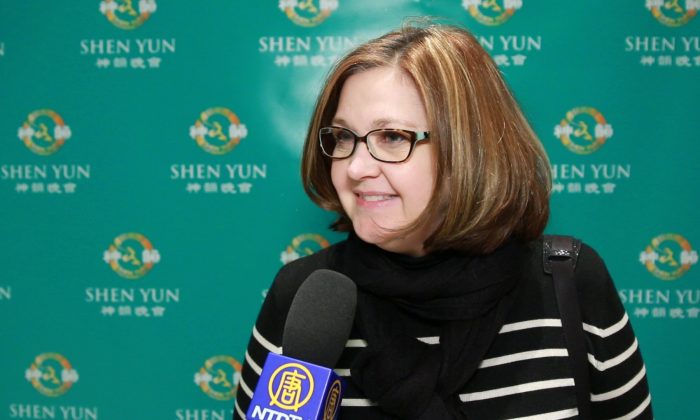 As a music professor at St. Norbert College in Greenbay, Dr. Parks was especially interested in seeing Shen Yun Performing Arts and joined the enthusiastic audience welcoming the classical dance and music performance to Appleton.

“The song texts the singers perform are original works written for these pieces. Brimming with philosophical reflection about human life and containing deep layers of meaning, the texts go beyond the boundaries of nation, race, and culture, and have been fondly received and appreciated the world over,” states the company’s website.

Dr. Parks was amazed by the singers and said, “It’s a very strong dramatic sound. I was very moved by the lyrics. That was something I did not expect to see in an event like this.”

“The concept of compassion and the concept of ownership of our own actions, that was rather an unexpected surprise. I really appreciated it. It was a great poem to hear,” she said.

An integral part of the performances is the Shen Yun Orchestra, which has been highly praised by audience members world-wide.

“The orchestra is really exciting,” Dr. Parks said. “I’m a singer and a choral person, so it’s fun for me hear the piano and baritone, but the orchestra is exceptional, and it’s fun to hear the ethnic instruments as well, as part of the blend of the music.

“We’ve really been enjoying that.”

She found every aspect of the performances touching, and said, “There’s a culture in the East that is such a strong presence in the world and is something that we need to learn so much more of. So bringing each layer of culture to us is so welcome, and I appreciate that very much,” she said.