Order of Australia Recipient, Choreographer Thanks Shen Yun for Its Honesty and Brilliance 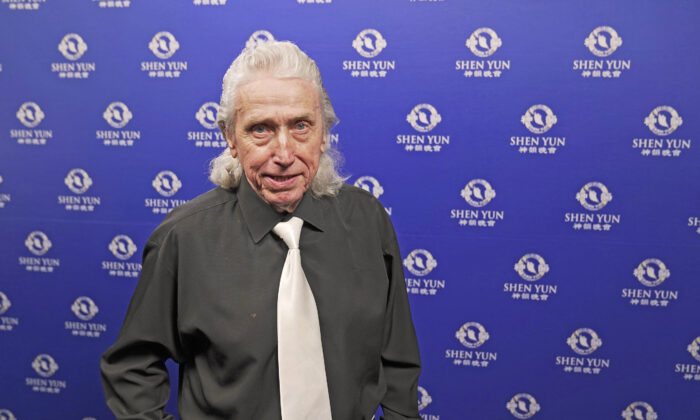 SYDNEY, Australia—Ross Hutchinson, an OAM (Medal of the Order of Australia) recipient, knows a bit about performing arts—in fact, the accomplished dancer and choreographer who established his own performing arts academy described New York-based Shen Yun Performing Arts to be “such perfection.”

“It is such a joy for me, as a dancer and a member of the public, to be able to come and watch such excellence—such excitement, such color, and such perfection,” Hutchinson said after watching the March 11, 2020 matinee performance at Sydney’s Capitol Theatre. “I’m your biggest fan.”

Shen Yun aims to uplift and inspire theatergoers by showcasing 5,000 years of Chinese culture through “traditional aesthetics”—which include classically trained dancers, a unique orchestra that blends East and West, and an animated backdrop.

To achieve such a high level of artistry, Shen Yun performers undergo “strict training in both physical expression and specific postures” through a combination of leaps, turns, flips, spins, other aerial and tumbling techniques. This form of classical dance is described as “one of the most rigorous and expressive art forms in the world,” according to the Shen Yun website.

“The time they’ve spent to become so beautifully trained, the time they have given to develop themselves to such perfection—I thank them,” Hutchinson said. “Their success shines, and it is only from there greater successes are still to come.”

Through Shen Yun, audience members glimpse through China’s 5000- year-old history via a series of vignettes—from ancient dynasties to modern times. The sound of Shen Yun’s orchestra blends with the stories, which aims to showcase a culture that was nearly destroyed by the communist regime.

“I honor with such love and such respect, and I thank them for such honesty, for such brilliance,” he said.

Annette Keefe, fashion designer and owner of the Annette m.k. clothing brand, was intrigued by Shen Yun and was thoroughly impressed by the colors of the performance.

“The colors were amazing, the ombre they did with the skirts was amazing,” she said.

As a fashion designer, Keefe was inspired to explore the culture behind the costumes.

According to the Shen Yun website, traditional Chinese clothing is said to “be inspired by the attire worn in the heavens.” Most of Shen Yun’s dance costumes are based on traditional Han clothing, over 50 ethnic minority groups, as well as the “regalia of divinities from folklore and mythology.”

“It makes me want to go home and learn more about China and their history and all the beautiful cultures that they had,” Keefe said.

Keefe added that reviving traditional Chinese culture—which is the mission of Shen Yun—is important for both younger Chinese and Australians.

“We have to have history and heritage and certainly the Chinese culture is definitely there,” she said.

“And it would be a shame not for the younger Chinese to learn and know all about this. And, [for] us as Australians, myself as an Australian, it’s just lovely to learn that.”