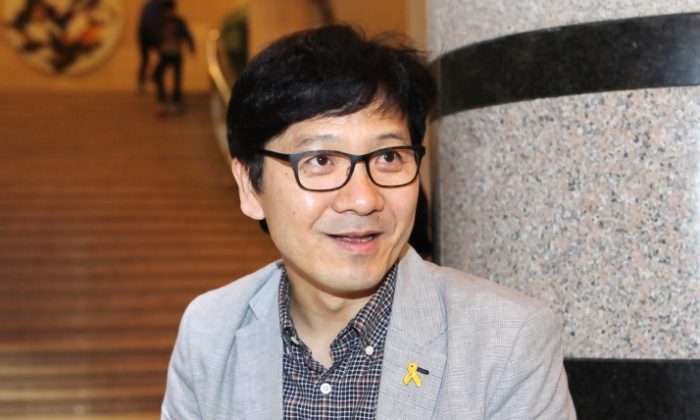 “I feel that Shen Yun’s music (this year) is more beautiful than ever before.” “As a musician, my wish is that Shen Yun Performing Arts Orchestra could exclusively perform in Korea,” he added.

Inspired by the profound connotations in Shen Yun, Kang Man Ho shared his feelings and said, “After seeing the performance, I feel like being purified. There are ups and downs in the journey of our lives, but mine was seemingly modified, and all the scars seemed to have been purified.”

Mr. Kang continued, “The world’s common language is art. I think among all the artistic performances in the world, Shen Yun is the only one that has truly demonstrated the values of arts perfectly.”

Lee Chung Ho, president of Korea Arts and Culture Group General Association, was deeply impressed by Shen Yun Performing Arts New York Company’s performance in Changwon on the evening of April 29. He said, “The performance of the live orchestra blending Eastern and Western musical instruments was impeccable. It can be referred to as a dream-like performance.”

Coming all the way from Ulsan to Changwon to attend the Shen Yun show, Mr. Lee explained why he traveled so far to see Shen Yun, “This is a must-see performance if one wants to really understand China.”

“Humanity’s treasure was nearly lost, but through breathtaking music and dance, Shen Yun is bringing back this glorious culture,” says Shen Yun’s website.

“It (Shen Yun) combines China’ long history with dances in its performance. It’s something that other countries cannot imitate,” Mr. Lee said.

“At first, I was surprised to see the seamless synchronization of the dynamic backdrops and the performance on the stage. Then I found it very natural, and felt it so vivid and lifelike. It’s indeed a rarely-seen coordination between modernized backdrops and (traditional) stage. It’s amazing,” Mr. Lee said.

In addition to story-telling through dance, Shen Yun is also known for large group dances in which the movements of all the dancers are flawlessly timed.

“The level of every performer’s technical skills is very high. It practically reached the level of perfection, to which I have no words to describe. Not only are female performers’ dancing skills perfect, but male dancers’ performances are remarkably outstanding as well.”