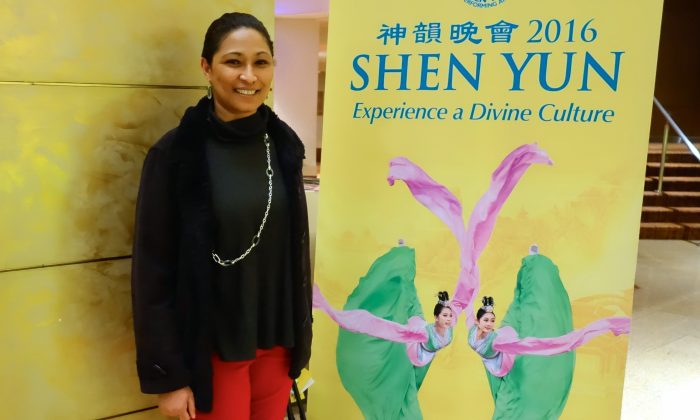 ATLANTA—When the master of ceremonies introduced the Shen Yun Orchestra during the Shen Yun performance, the audience gave thunderous applause, with some cheers. When he acknowledged the musicians at the end, the standing ovation began.

Mrs. Karima Saidi said what most touched her about opening night of Shen Yun was “The music. The music.”

She had never seen Shen Yun before. “It’s an amazing show. I really loved it. All of the costumes, the music, it’s really wonderful. I really enjoyed it. It’s my first time, but I think I’ll be a faithful customer,” she said.

Originally from Tunisia, Mrs. Saidi is a nurse. Her husband’s friend had seen Shen Yun three times, and he encouraged them to come.

I felt like at some point, they were performing kind of from heaven.
— Karima Saidi

Mrs. Saidi seems to have felt something transcendent in the art of Shen Yun. “I felt like at some point, they were performing kind of from heaven or something, with those costumes, colors. It’s really amazing,” she said.

According to the program book, Mrs. Saidi was connecting to Shen Yun’s mission. The artists consider their heritage “a gift from the divine land. China was once known as the Celestial Empire, its glorious culture said to have been brought down from the heavens.”

She was both touched and enlightened by the dances that showed contemporary China, “Especially when they’re talking about the persecution. I didn’t think about that before. I didn’t know that people could be persecuted just because they believed in meditation. I learned something today.”

“China’s ancient civilization was, in fact, deeply spiritual,” says the program book. “The Chinese Communist Party has tried to destroy this ancient heritage for decades.”