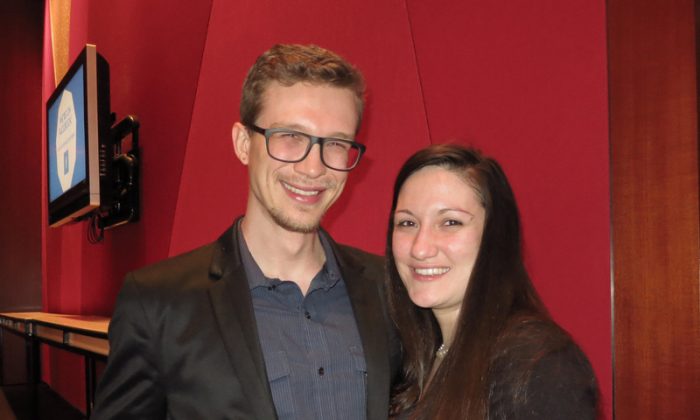 ATLANTA—There is something special in Shen Yun Performing Arts shows that draws graphic designer Connor Strickland back to see the New York-based company’s performance each year.

“This is my third year. I was going by a local mall and I had watched the video over and over and I said to myself, ‘I should really go to this,’ and I enjoyed what I saw on the video, but when I actually got here and I saw the performance, it was breathtaking,” said Mr. Strickland.

Shen Yun travels around the world each year with a completely new program.

“Through the universal language of music and dance, Shen Yun weaves a wondrous tapestry of heavenly realms, ancient legends, and modern heroic tales, taking you on a journey through 5,000 years of Chinese culture,” states the Shen Yun website. “Its stunning beauty and tremendous energy leave audiences uplifted and inspired.”

This feeling of being uplifted and inspired is exactly what Mr. Strickland experiences at a Shen Yun performance.

Different elements of Shen Yun make its performances unique. There are the difficult leaping and tumbling techniques in classical Chinese dance, and folk dance, the orchestra that combines classical Western and Chinese instruments, and as animated digital projections that interact with the stage, and more.

“The way that they can perform the jumps and the acrobatics and being able to capture that in a photography mindset is really difficult, but they do it really well,” Mr. Strickland said.

Watching the animated backdrops and characters flying in and out from the screen onto the stage particularly caught Mr. Strickland’s attention, giving him professional inspiration for his own design work.

“I really enjoy to how they can really sync out their movements, drop behind the stage, and actually become part of the background and interact with it,” Mr. Strickland said.

“Seeing that design and motion of the cinematography really inspires me to incorporate more of the designs and ideas in my own profession. So, it’s really inspiring.”

Shen Yun performances, and even their promotional pamphlets and posters, are full of energy, and draw the audience in, according to Mr. Strickland.

“As always, the performance is packed full of energy and as a designer, … the pamphlets, the brochures, the web design are always displaying energy, [including] that power that they display on stage right on the screen in front of me. So, I find that to be really impactful.”

“Definitely inspired. It makes me feel that whether it’s here in the United States or wherever I may go, that there’s definitely people that I can always relate to regardless of race, creed, or any individual mindset,” he said.