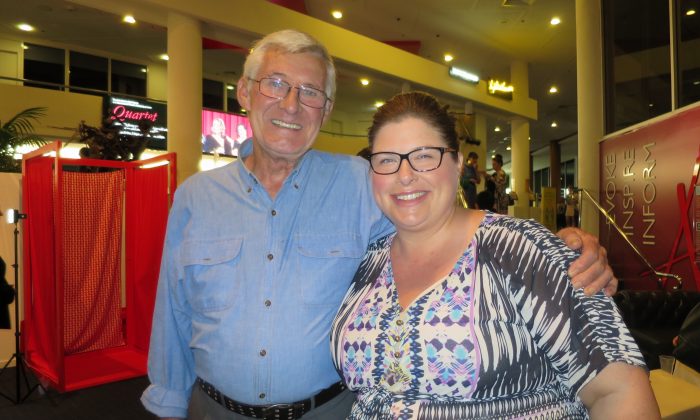 “I don’t fully understand why it can’t be performed in China. I guess it’s to keep that history from people and that doesn’t make any sense,” the Gold Coast icon said.

“I find that amazing. I don’t fully understand how people can be denied such a beautiful gift—the traditions and the beautiful knowledge of ancestry—it’s a real shame.”

Ms. Major is also a panellist on the Gold Coast for Women of Influence, and teaches public speaking under the banner of Major Confident.

New York-based Shen Yun cannot be seen in China today, where traditional culture has been nearly lost under 60 years of communist rule.

Set up in 2006, the company’s mission is to use performing arts to revive the essence of Chinese culture—traditionally considered a divinely inspired civilization. Shen Yun has since become an international phenomenon, bringing the wonders of ancient Chinese culture to millions across the globe, according to its website.

Feeling calm and at peace, Ms. Major was speaking after the final performance at the Arts Theatre, The Arts Centre Gold Coast, on March 5.

“It’s something I have never seen before, which is really an experience. It certainly is an experience, that’s how to describe it,” she said, feeling replenished by the spirituality woven into the presentation.

“It showed me so much I’ve never seen or known about before, which is really nice. So it almost feels like a special gift, a bit of an insight.”

“The backdrop was amazing. The digital work was just sensational. I love the two announcers for people who don’t fully understand. It was really great … a lovely journey you felt a part of,” Ms. Major said.

“The music was great! And the orchestra … there wasn’t anything like it. The colours were just amazing.”

She was accompanied by her father-in-law Kevin Major, a retired businessman.

“I absolutely loved it. The closest I ever got to Chinese culture,” Mr. Major said. “The dancers were so delicate and the costuming and choreography were just absolutely fantastic.

“I would say you’ve got to see it to appreciate it. All the description in the world can’t give you what actually is happening.

“You have to see their performance to appreciate their skills … the choreography, absolutely beautiful. And the performers, the artists, they were so in time, you couldn’t see a mistake. It was lovely.”