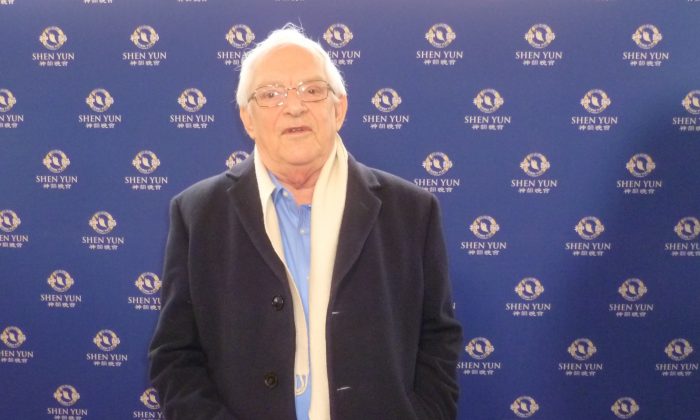 TORONTO—Milo Vassallo, former consul general of Malta in Toronto was back to see Shen Yun Performing Arts on March 31, 2019 at the Four Seasons Centre for the Performing Arts. He had seen a production a few years ago, and this year he decided to surprise his wife with a pair of tickets for her birthday.

He was in awe at the beauty of the performance, and said he would be back again and again.

“It’s unbelievable … the ones that haven’t seen it are missing something extraordinary. It’s a beautiful experience,” he said.

Vassallo said he was impressed by the extent to which the artists put their hearts and souls into their performances.

“In every single thing, there was something that gives you joy, [the feeling] that you are part of it and enjoying it … They are all professionals and gave the audience their money’s worth.”

Based in New York, Shen Yun has been touring the globe since its establishment in 2006 by overseas Chinese artists. Their mission is to revive traditional Chinese culture.

“Chinese culture is thousands and thousands of years old, and it is great that they revived it … to share it with the rest of the world,” said Vassallo.

“I sincerely hope that in the future when [Shen Yun] comes again, people that have missed it for some reason or another, make it a point of coming and share in the beauty and the culture of the Chinese,” he said.

Vinay Sukumar, a category leader at Amazon, also attended Shen Yun with his family; his wife, mother, and sister.

“I know my mother was asking me in between, she couldn’t differentiate between where the graphics were and where the actual dancers were. They were going back and forth. It was very well put-together—it was seamless.”

“It was tough to believe that there was actually a live performance synchronized with the dance moves. It was a seamless experience,” he said.

In addition to the production values, Sukumar was also impressed by the culture and storytelling.

“It is very educational and very inspiring,” he said.

He said Shen Yun inspires audience members to lift their eyes from their cell phones and realize the beautiful things that surround them.

“They kind of bring that message out to say, ‘Hey, don’t get lost in all of that. There’s so much more to this world and so much more that’s gone in the past that you can look back and learn from,’” he said.

“The very first time I saw it, I said, ‘Wow, such beautiful colors,’ and the performance was flawless. Everything was in sync … It caught our attention,” she said.

“I thought it was very well put together. The music was beautiful. So were the dancers. I think it was a great family outing together,” she said.