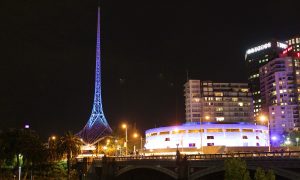 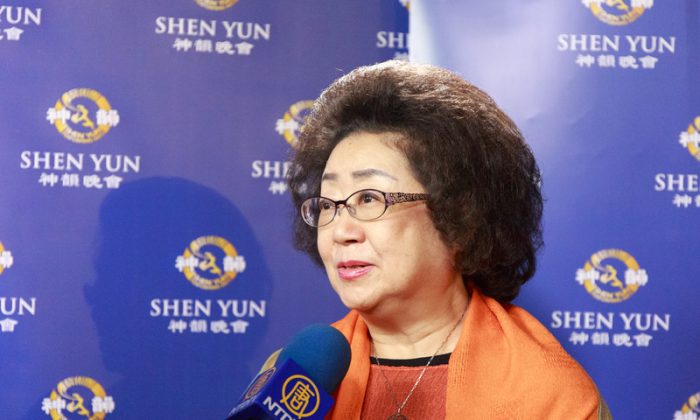 Touched by the exquisite performance presented by Shen Yun artists, Director General Fan exclaimed, “It’s really very good to learn that Shen Yun’s young dancers, musicians and other artists are trained at the New York-based Fei Tian Academy of the Arts to let the entire world know the essence of the 5,000-year Chinese culture in this century.—It’s something special.”

She said, “From the performances, we can tell every dancer is very pure and sincere.”

Ms. Fan also said, “The show is a combination of culture and high-tech. The younger generation may hardly have this kind of opportunity to see such a magnificent show. It will have some impact on them. People (in Taiwan) are influenced by Western culture more than Chinese culture. The Chinese culture should be passed down to our next generation gradually, while people are seeking innovation. It takes a lot of efforts to revive such kind of culture.”

Finally, after learning that Shen Yun is going to perform an additional show on March 5 exclusively for the Kaohsiung residents who suffered from the massive gas explosion incident last year, Ms. Fan said,

“It’s very meaningful, because members of the families victimized by the gas explosions will be soothed after seeing such a wonderful show.”

‘The positive energy is so powerful’

Artists Ms. Zhang and Ms. Lin saw the March 4 performance for the first time, they were deeply impressed by theme of benevolence represented in the performance.

Lin was moved by the positive energy for the society conveyed in Shen Yun. “The positive energy is so powerful. The dance presented a message from the soul and the universe, but the meaning it conveyed should be experienced and understood by the audience members themselves,” said Ms. Lin.

“The scenes, colors, and all the movements and dances are vivid.” Ms. Zhang said.

Her artist’s eye noted the combination of the dynamic backdrops and dances, and the colors matched for the backdrops and the dancers’ costumes are brilliant—”it’s great and the effect is excellent,” she said.

Ms. Zhang emphasized the compassion theme conveyed in the dance.  “We need to have faith, the faith of compassion.”

“Seeing the first half, I feel it has a great diversity [of topics], but I am much more impressed by the stories it represents. Without conversation, it fully expresses the entire stories just with the body and dance.”

Ms. Lin was most impressed by the program about the monks. She says that the story is simple and easy to understand, but with the superb dance and martial arts skills, combining the effect of the stage, it not only attracts people, but is loved by both the young and the old.

‘The dances were divine’

March 5 was the last day of the Chinese New Year and the Lantern Festival. Shen Yun brought the citizens of Kaohsiung a great gift by donating the revenue from its performance on March 5 to the victims of the disastrous gas explosion last year.

The city’s chief secretary Lee Rui-Tsang thanked Shen Yun for the charity, “We are very honored that Shen Yun values the city so much. The staff made such contribution after I told them stories happened after the gas explosion. I respect them and would like to thank Shen Yun.”

“The city appreciates the effort Divine Culture Foundation put in to make this happen. I just made a comment and couldn’t believe that my far-fetched wish shall come true so fast,” said Mr. Lee.

After watching Shen Yun’s performance, Mr. Lee was even more impressed by it. “The dances were divine. The music from the live orchestra seamlessly became part of the dancing movements. With the background animation interacting with the artists, the stories became stunningly interesting.”

The Fable of the Magic Brush story-dance stood out for Mr. Lee. “The legends and stories presented by Shen Yun often involved the good and the evil and the good eventually triumph. These stories cannot be promoted frequently enough in today’s world.”

“I think it is trying to send out the message of Truthfulness-Compassion-Forbearance to everyone.”