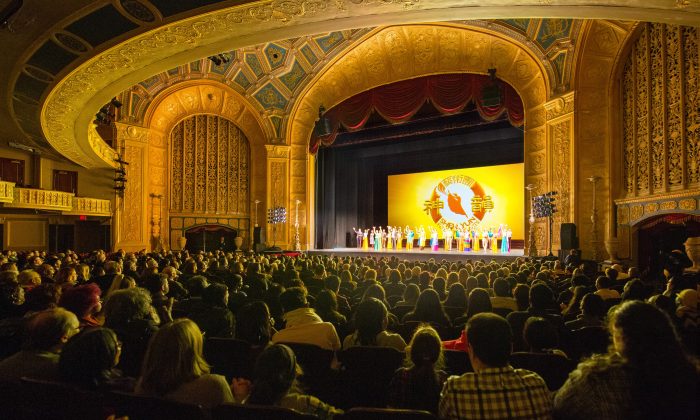 “It was great to see the culture,… it was nice that they [the emcees] explained before and then you can kind of follow it as the dancers perform, you could see what they were saying.” Mr. Biondo said.

New York-based Shen Yun is the world’s premier classical Chinese dance and music company, formed by artists who wanted to revive the lost traditional Chinese culture and share it with the world.

A Shen Yun performance is hosted by two bilingual (English/Chinese) emcees who introduce each of the 20 or vignettes. The program features story-based dances that depict scenes form Chinese history, mythology, and folklore spanning China’s 5,000-year history from ancient times to the present day.

”It was very informative on many parts as far as the culture, but I really found the performance to be lovely and the colors and thee music and of course the dancing was just phenomenal. Very talented, we really enjoyed it.” Mrs. Biondo said.

Mr. Biondo pointed out the unique digital backdrop that accompanied the storytelling, describing how dancers went from stage to screen, even going to the moon in one vignette.

“It’s all so transcendental, it was cool how they did that,” Mr. Biondo said. He described how it was more than just a technical effect, it really added to the storytelling.

“That really sent a message,” he said. “It was good to see how evil lost, that’s always a plus! I was happy for that, it gives you hope …it gives people hope.”

The couple noticed this theme was present in more than just that one story. Traditional Chinese culture is built on beliefs stemming from Buddhism, Taoism, and Confucianism, as the Shen Yun program explains, and thus the stories from Chinese culture and history are replete with lessons and virtues such as wisdom, propriety, benevolence, and justice.

The Chinese believed that good is rewarded with good and evil punished, in harmony between Heaven and Earth, and in divine retribution.

Mr. Biondo felt these were some aspects that made Shen Yun an uplifting experience.

“I’d say it’s very inspiring, it’s very entertaining and its very beautiful and it’s nice to see other cultures so it’s something we don’t see that often so that was a nice message,” Mr. Biondo said.