Company President Inspired to Help Others After Experiencing Shen Yun 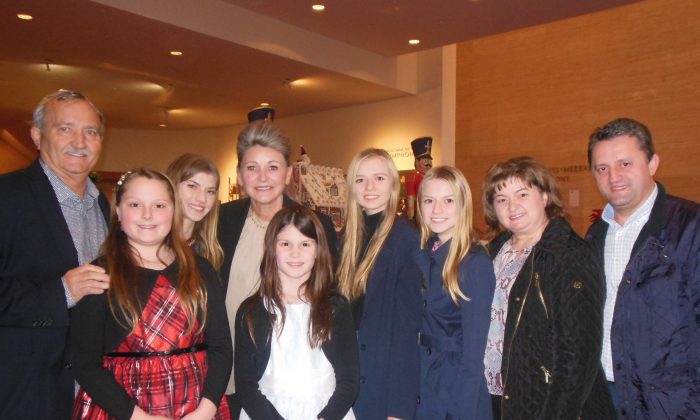 HOUSTON—Daniela Coroiescu grew up in Romania during a time when political and religious liberties were suppressed. The country was plagued by communism and people were living under fear and terror. This has taught Coroiescu an important lesson—to appreciate the freedom she has in the United States.

So when Coroiescu experienced Shen Yun Performing Arts at the Jones Hall for Performing Arts in Houston, Texas on Dec. 29, she was instantly captivated by the deep themes portrayed in the performance.

“I believe in the divine and in God. And I know that back in the communist culture, we could not talk about that,” she said. “I think it’s very nice to bring hope to people, believing in a divine and God. It brings us back to peace.”

That is exactly what Shen Yun aims to do. This New York-based company was formed in 2006 with a mission to revive China’s semi-divine culture. On the surface, Shen Yun depicts traditional Chinese culture through dance and music. But the performance tells a more universal story, delving into spiritual elements that have heavily influenced people’s daily lives.

For thousands of years, Buddhism, Taoism, and other disciplines were at the heart of Chinese society, according to Shen Yun. And people lived by principles such as benevolence and justice, propriety and wisdom, respect for the heavens, and divine retribution, with an aim to improve oneself morally and lead a virtuous life.

It is this aspect of Chinese culture that has inspired Coroiescu to spend less time focusing on herself and instead, go out and help other people.

Coroiescu, who is the president and co-owner of leading construction company D & D Roof Services, said modern people easily become caught up with their fast-paced lives and rarely take notice of people around them. She said the performance has helped her to come to that realization, and has encouraged her to change her ways.

“I think that brought back that awareness that we need to show other people mercy and grace,” she said.

Coroiescu, who attended the performance with her husband and family, said she appreciates Shen Yun for bringing this culture to the American people.

“I think that is one of the most wonderful things you can do,” she said.

According to the Shen Yun website, Chinese culture is said to have begun with the Yellow Emperor, over 5,000 years ago, who taught his subjects how to live in accordance with the Tao, or the Way. Ancient Chinese legends also speak of deities who passed on essential elements of Chinese culture to humans, like how Cangjie created Chinese characters, Shennong imparted agriculture, and Suiren revealed the uses of fire.

Coroiescu said she really enjoyed learning about this culture.

“I think China has a great, very old history, and culture. It’s very diverse,” she said.

With reporting by Sherry Dong and Janita Kan