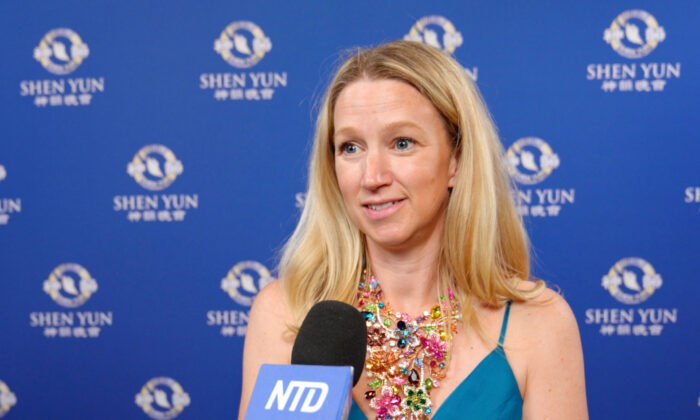 Sharon Buck at Flynn Center for the Performing Arts in Burlington, Vermont, on May 21, 2022. (NTD)

BURLINGTON, Vt.—Sharon Buck, a manager for a department in the New York state government, was delighted by Shen Yun Performing Arts at Flynn Center for the Performing Arts in Vermont on May 21.

“It’s dramatic, funny, and romantic—it’s all of the things that you want to see,” she said.

“The choreography is on point, the costumes are stunning, and the music really works to help you get into the mood of the piece that they’re presenting.”

According to the company’s website, this year’s performance demonstrates “China before communism.”

“My mom called and said that she had read about the show in her local newspaper, and we booked tickets for the first closest show that we could find,” she said.

“It’s worth every moment of time and anything that you need to do to get to the show, because it’s stunning,” she added.

In addition to myths and legends, Shen Yun also presents a mini-drama depicting the persecution of Falun Dafa, also called Falun Gong—a spiritual discipline that promotes the principles of truthfulness, compassion, and tolerance, for which its adherents have been persecuted by the Chinese Communist Party (CCP) since 1999.

Ms. Buck commented that Shen Yun’s use of storytelling through music and dance was a great way to reach audience members’ hearts and illustrate the persecutions of faith taking place in China.

“It’s an incredible way to do it through this art form. Because you’re really drawing people in, you’re entertaining them, you’re creating a positive association with the story. And I think it’s a great way to spread their mission and their message,” she said.

“The fact that I’m able to see the story unfold in a sequence, I think, helps me to really understand what the message is … through song and dance. and shows they want to bring attention to the fact that this persecution still exists.”