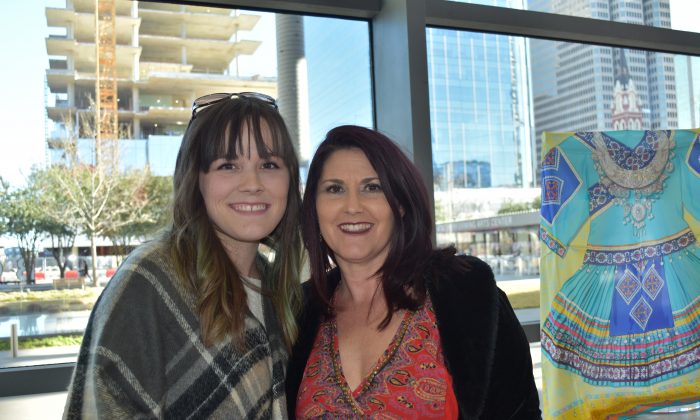 DALLAS—Tiffany Mullins is a choreographer and has her own performing arts studio, Training Ground Studios, where she teaches dance in Texas. On Jan. 27, she caught the last performance of Shen Yun Performing Arts at the Winspear Opera House in Dallas.

It was the first time Mullins had see Shen Yun, which features classical Chinese dance, a complete dance system from China which dates back thousands of years. It includes leaps and tumbling through the air, and its own language of movement and meaning. It was something new for the choreographer.

“I thought it was amazing,” said Mullins. “I like how they stayed to their uniqueness of their steps and techniques and they don’t try to Americanize it, is what I really enjoyed. I thought for us that see different choreography all the time, it was refreshing and it was new to see that.”

“So of course the colors were amazing, costume was amazing, but as a choreographer, yes, I definitely felt intrigued and pulled into it because it wasn’t the same of what we see all the time everyday here. So I really enjoyed it.”

Her friend, Tiffany Prasifka, who attended the performance with her, agreed.

“It was the first time i have ever seen anything like that,” Prasifka said. “So it was a whole new experience but it was beautiful. I just loved the whole thing and the costumes and the choreography and the dancing and the music. It was all just very beautiful.”

The two both enjoyed Shen Yun’s animated backdrop as well, and Mullins was inspired.

“I think that part inspires everybody to think more out of the box, even if you’re not a dancer, or a choreographer, or performer,” said Mullins.

Shen Yun’s animated backdrop displays scenes from ancient China and magical realms. Dancers appear to move in and out of extraordinary scenes.

“I think that really pulls you more into the dancing,” said Mullins.

Headquartered in New York, Shen Yun Performing Arts was formed with the vision of reviving the traditional Chinese culture, which was based on values like compassion, loyalty and piety, and built upon the lessons of dynasty after dynasty for 5,000 years. The traditional culture of China has been threatened in recent decades since the communist party in China took control in China in 1949 and started campaigns like the Cultural Revolution to eradicate Chinese traditions, ways of life, and spirituality.

As a spiritual person herself, Mullins appreciated seeing the expression of Chinese values and spirituality.

“I connected with the spiritual side,” she said.

“I believe in a creator, and I believe in a savior, so when they were putting out the spiritual part of it, I thought it was beautiful,” she said. “I was very pleased that they put that part of it out there, because then it gives it more of a storyline.”

Mullins said that Shen Yun is unique, and that performers and those in the arts should come see Shen Yun perform.

“I do believe that anybody, performer-wise or not, but especially the performers who thinks they’ve seen it all: I think that this show is so unique that really, you haven’t seen it all, until you’ve seen it [Shen Yun].”

“It kept me intrigued the whole time,” she added. “I didn’t feel like ‘Oh, I’ve seen that before, I’ve seen that move or heard that music.’ The orchestra was amazing. They were spot on.”

Mullins added, “I think they did a phenomenal job of incorporating every inch of it: the live music, the backdrop, all the choreography and all of the performers were amazing of course, and beautiful. And the costuming, oh my word.”

“The costuming was like hands down, top notch,” she said. “Like things I would want to wear in dance all the time, if I could.”

The friends also enjoyed that the distinct expression of the male and female dance.

“You can see the masculinity and the femininity, but it was separate,” said Prasifka.

“It was beautiful,” said Mullins. “The men really got to dance like men and we loved that. It was awesome.”