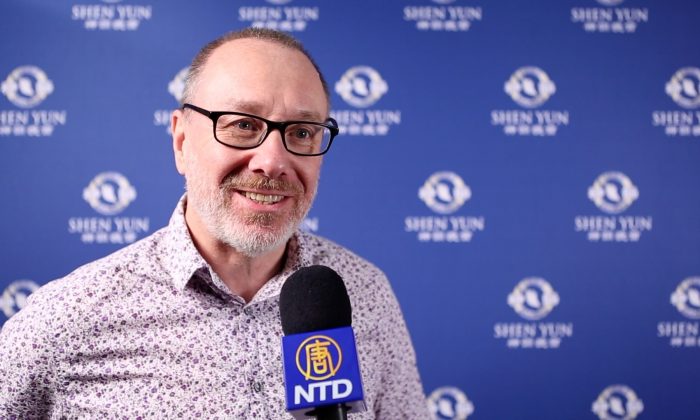 Shen Yun performed at ICC Birmingham on Jan. 12 as part of its 2019 world tour in which six equal-sized companies will travel to over 100 cities across four continents.

John said the performance was “touching” because the movement of the dancers and the live orchestral accompaniment were “so pure.”

He said the performance “Visiting Chang’e at the Moon Palace” was “extremely clever” because it “made us think that we’re not just here on earth, we’re part of a bigger universe.”

In the performance, one of China’s greatest emperors, Tang Taizong (598-649), becomes captivated by the goddess of the moon, Chang’e.

“We need to think bigger,” John said. “We’re not just here on earth, are we? We’re part of a bigger picture.”

Shen Yun began in New York when a group of artists from around the world came together with the mission of reviving China’s divinely inspired culture. Since 2006, the company has traveled the globe every year to show the authentic traditional Chinese culture through music and dance.

At the core of traditional Chinese culture is a belief in heaven or the divine, and that in life this belief plays out through the virtues of honor, benevolence, honesty, and kindness.

This moral philosophy in China, developed and passed down generation after generation over 5,000 years, is exactly what Shen Yun’s dances showcase, through stories of historical events, myths, and legends.

“It’s a very spiritual performance and makes you think on a bigger level,” John said.

For the long expanse of Chinese history, the spiritual values of the culture found shape through each dynasty, and Shen Yun shows this via music and dance.

Ultimately, the Shen Yun performance as a whole gave John a sense of “purity and beauty” that he said combined to make the show “fascinating.”

Salu Fellows, a chartered physiotherapist, said the performance was “absolutely exquisite” and “beautiful.”

Originally from Hong Kong, Fellows grew up in the UK but said the values portrayed in Shen Yun “must be in my blood.”

In China, teachings from Buddhism, Taoism, and Confucianism have been passed down for millennia, forming the basis of Chinese moral philosophy. These ideas include the harmony between Heaven and Earth, the balance between man and nature, and divine retribution.

Fellows said values like these are as relevant to today as they were in ancient China.

“The storylines are similar throughout history,” she said. “The feeling of ethics and honourableness, which I very much try to adhere to myself. And that beauty is more important than being ‘rough and ready’ and gung-ho.”

Fellows said she enjoyed the “whole spectacle” of the Shen Yun performance and that it was “absolutely gorgeous.”

With reporting by NTD Television, Jane Gray, and John Smithies.