VP and Daughter Have a Tradition: See Shen Yun Together 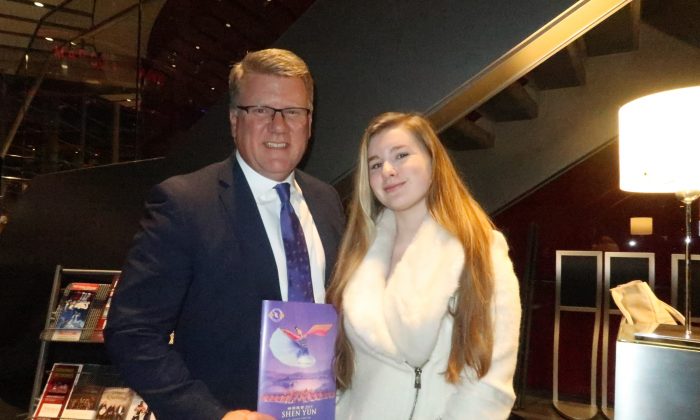 Kevin Raybon is the VP of sales operations at Thomson Reuters, and his daughter, Anndria Raybon, is a sophomore.

Mr. Raybon and his daughter have attended Shen Yun for four consecutive years in Dallas.

“This is our one night a year that my daughter and I really get together to come out and do something special together,” Raybon said, “so we like to get dressed up and make it a special time.”

“One of the great things that we like is that the show changes every year,” Raybon said.

Headquartered in New York, Shen Yun Performing Arts tours with a new production each year. Shen Yun began in 2006, when a group of artists had the wish to revive the traditional Chinese culture, which is based on Confucianism, Buddhism, and Taoism and the expression of many dynasties over a history of 5,000 years.

The traditional culture was almost lost after decades of desecration by the communist party in China. Using classical Chinese dance to convey the essence of the spiritual culture and its authentic values, Shen Yun Performing Arts is restoring its place.

“The dance is something we never see any other place,” Raybon said, adding that it is wonderful when culture comes to them, and that it is important to  learn about the oppression that people in China still face.

“The orchestra is always fabulous,” Raybon added, and then he turned to his daughter and asked her, “What do you like about it?”

Anndria Raybon said, “We always come here for the dance. Most people come here to see the different culture. I always like to see how not just the dance conveys the emotion of the dancers, but also the clothing, and the way they express it, and the light—everything conveys just anything they’re trying to make a statement about. That’s what I like about it.”

Mr. Raybon said, “You know, I get a sense of peace when I come here. It’s just a time when I can relax and enjoy the music and the visuals. The visuals are just amazing.”

Watching Shen Yun made Raybon feel closer to the people on the other side of the world.

“And I just find that it brings me peace and a good feeling knowing that the more we experience other cultures, the more we realize that people are not as different as we sometimes like to believe that they are. And I think that’s going to help us create a world of more peace and more kindness among all the nations, when we can start to understand each other more. I think it’s important.”

The two were asked if he would like to say anything to Shen Yun Performing Arts.

Raybon said: “Thank you for doing what you do. It’s obvious you put a lot of thought and care and work and time into bringing this to us to make our lives better.”