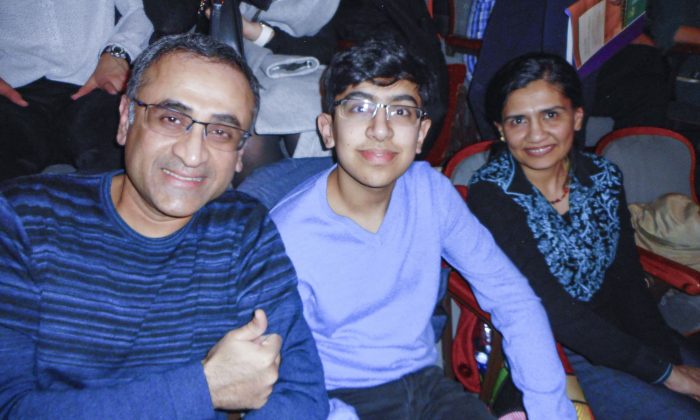 PHILADELPHIA—From ancient battlegrounds to Mongolian grasslands, Shen Yun Performing Arts act as a window into a grand culture that has been bestowed by the heavens.

Senior Vice President Mel Shakia said he enjoyed getting a glimpse of the Chinese traditions when he experienced the traditional dance and music production with his wife and 17-year-old son at the Merriam Theater during the evening performance on March 2.

“I think it’s incredible. One can get exposed a little to Chinese traditions. The music and art form were originally from China—we really wanted to see it,” he said.

Shakia, who works in product development at a cybersecurity company, said that he expanded his knowledge about Chinese culture after seeing the production. In particular, he learned about “some of the ancient culture, and the divinity aspect of it, and the connections to the heavens.”

China was once known as Shen Zhou, or Divine Land, a term to describe an ancient land where mortals and deities coexisted and a belief that the culture was passed down from divine beings. The New York-based company’s mission is to revive China’s semi-divine culture and traditions and share it to the world through performing arts.

Shakia, who is originally from India but has lived in the United States for about 30 years, said he was able to appreciate Chinese culture more because he could see how there were parallels with his own Indian culture.

He was particularly intrigued by how some aspects of the costumes, the practice of meditation, and the music, which he described as very soothing, were shared between the two cultures.

“There was a lot of energy in that dance,” he added.

Shakia added that he thinks it is important to have a divine connection in culture. Many Shen Yun stories contain an element of spirituality, as the Chinese in the past were heavily influenced by Buddhism, Taoism, and Confucianism, and had reverence toward divine beings.

Many Shen Yun performers try to continue this tradition today by practicing the spiritual discipline Falun Dafa, which they express in their art. According to the Shen Yun website, by having a spiritual connection, it helps motivate the dancers to strive to excel, and allows them to put their heart into each dance movement or note played.

Falun Dafa, or Falun Gong, teaches “Truthfulness, Compassion, and Tolerance” and includes meditation exercises. It has helped over 100 million Chinese people today understand and return to the essence of traditional Chinese culture.

Shakia said he also understands the importance of meditation and practices a form of meditation himself. He said, “I actually do meditation myself, and I get deep into [its] philosophy when I study about it.”

“That’s why [the divine culture is] fascinating, because I study that anyway,” he added.

Shen Yun is currently in the midst of its 2019 tour. The dance and music company has performed in over 24 sold out shows in Philadelphia. The company will complete its Philadelphia run on March 3.

With reporting by Tony Dang.