Shen Yun’s Message for the Pandemic—‘Hang On, Don’t Give Up,’ Says Musician 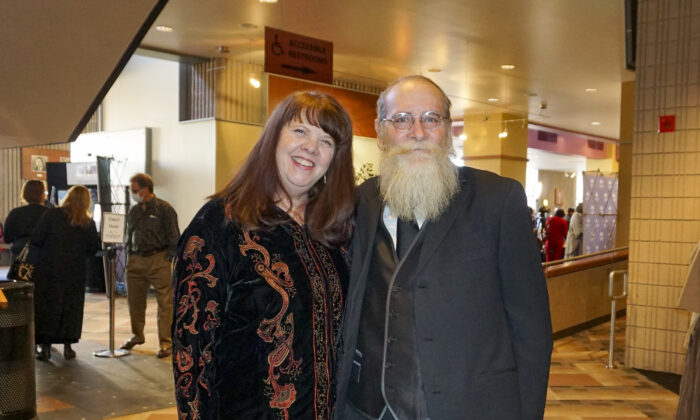 COLORADO SPRINGS, Colo.—Shen Yun Performing Arts has a message for all of us who are still navigating the pandemic: “Hang on, don’t give up, don’t let go of yourself, stay true, keep blossoming,” said musician Ruth Wilkey of the performance.

Ruth and her husband, Daniel Wilkey, attended Shen Yun at the Pikes Peak Center for the Performing Arts in Colorado Springs. Ruth sings, plays the piano, and has been a music teacher for 30 years.

Ruth was astounded Shen Yun’s vocalist. The baritone particularly impressed her with a song “To Heaven in this Lifetime,” which tells the story of the soul’s journey through the planes of heaven to await the Creator on Earth.

There’s the hope and the love and the joy and the life, because so many things are pushing us down and oppressing us and threatening us.
— Ruth Wilkey

“That was powerful,”  she said of the message. “There’s the hope and the love and the joy and the life, because so many things are pushing us down and oppressing us and threatening us,” Ruth said. She added that Chinese culture was being destroyed at the present time and that America was facing a similar fate.

“It’s a beautiful message, how you’re coming back to life with your traditions,” she said.

Daniel, a retired independent photographer, agreed with his wife and remarked at the performance’s healing properties. “It’s very bright. And the music also, it’s just so sparkly and lively. It’s been a joy,” he said.

He also expressed appreciation for the elaborate and fine architecture and textile designs from China’s 5,000 years of civilization.

New York-based Shen Yun is reviving China’s traditional culture through its classical and ethnic dance and music. Each piece in the two-hour-long performance portrays a story related to China’s rich, divinely-inspired history.

As a photographer, Daniel said he was overwhelmed by the beautiful colors in Shen Yun’s costumes and backdrops. He was also impressed to learn that Shen Yun‘s style of dancing is an authentic presentation of China’s traditions.

“It is so beautiful, and the different color schemes and patterns where—as you go from the south of China up over past the Great Wall into the [homeland of the] Juchen people—very interesting.

“I think most people here in the United States don’t realize just how much variety there is in what we now we call China,” he said.

“The Men of the Juchen” is a dance depicting the culture of the predecessors of the Manchurians. The Juchen were famous for their horsemanship and skill in archery.

Ruth said she wished her adopted Chinese sister from Hong Kong was watching Shen Yun with her.

“She has been telling me what’s happening with the Falun Gong and the Uyghur people as well. It’s just breaking her heart. I was wishing so much I had her with me today, it’s just so beautiful,” Ruth said.

Two of Shen Yun’s mini-dramas depict the story of Falun Gong, a spiritual practice that teaches people to improve their moral and physical wellbeing according to the principles of truthfulness, compassion, and forbearance, but that is being brutally persecuted by the Chinese regime.

Daniel added that he felt Shen Yun’s message is connected to the divine.

Whether the feeling of oppression comes from the outside or whether it is one’s own depression, Shen Yun always offers hope, he said: “The divine is watching out, so don’t give up.”