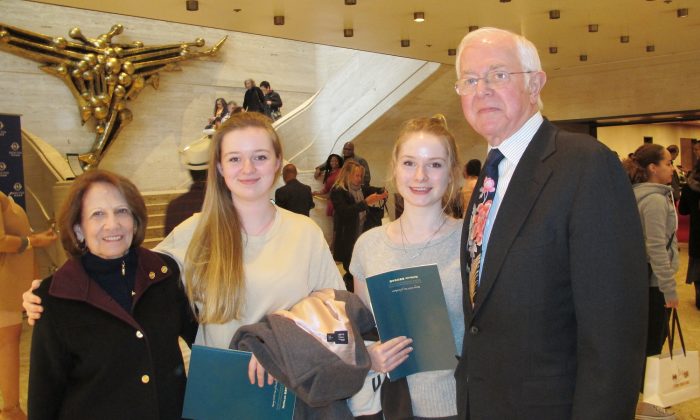 NEW YORK—Because Shen Yun Performing Arts offers so many elements—from colorful costumes to soul stirring, all-original music, to story-based dances that tell of China’s 5,000 years of civilization—the performance often resonates differently with each seeing it. But it’s not often that one family catches such specific details that illuminate the performance as a whole.

The Bents, Bruce and Nancy, brought two of their granddaughters, Eva-Jane and Sienna, to see Shen Yun’s last performance in New York this year, at Lincoln Center on March 13.

Bruce Bent is known as the co-inventor of the world’s first money fund, The Reserve Fund, recognized by the American Museum of Financial History for its impact on the nation’s financial history.

Because Mr. Bent has had many dealings internationally, he has known many Chinese businessmen and has been universally impressed with their intelligence and sophistication as a people. He marveled at a visit to The Taipei National Palace Museum, for example, which houses priceless treasures taken by Chiang Kai-shek when he left the mainland.

Looking at those artifacts, considering when they were created, and then comparing them to the West, he said, “We were swinging from trees and [the Chinese] people were very, very sophisticated.”

He was particularly enamored with the ethereal beauty of “Fairies of the Sea,” in which the delicate maidens use their long silk sleeves to simulate waves.

Eva-Jane was captivated by the costumes, too. She mentioned how in one dance, vibrant costumes with green dresses and orange sleeves mesmerized her. When the dancers closed their arms, the bright orange sleeves were hidden. But when they spread their arms while spinning, the orange opened up, and their reflection on the floor doubled their radiance.

As a ballroom dancer herself, Eva-Jane was surprised to learn that classical Chinese dance is one of most rigorous dance systems in the world, and she delighted in the flips and aerial techniques she saw.

Her sister, Sienna, also in high school, plays the piano; and she focused on the instrumental erhu soloist. “It really sounded like a voice, like it was a person singing and telling … a story that was really emotional. It was just incredible, the range it could reach,” she said.

Mrs. Bent had her eyes pinned on a drummer in the orchestra. As a little girl she longed to play the drums but lacked the nerve. She absolutely loved Shen Yun’s percussionist; a young lady, she said, was superb.

Overall, Mrs. Bent loved the stories told by the dances. In particular, she learned that China is more repressive than she had known. “People struggling to live their lives, and go by the Tao. The Way. That’s what we’re supposed to do here. All of us,” the research psychologist said.

A few of the dances tell stories of modern times and the struggle faced by people of faith. Shen Yun aims to restore not just the performing arts of China, but its soul as well. For millennia the Chinese people were influenced by Buddhism, Taoism and Confucianism, but when the communists took power, they began stripping that away at that heritage.

“I’m also pleased with the fact that people in [Shen Yun’s] organization are still fighting to get freedom for the people in the mainland. It’s great,” Mr. Bent said.