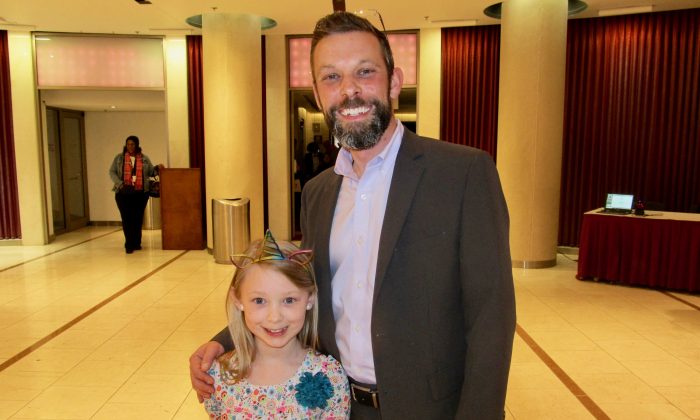 BIRMINGHAM, Ala.—Though young, Lily Giere is already a connoisseur of the performing arts. Having practiced ballet and jazz, and sat among the audience at operas, ballets, and a variety of other dance performances, she knew what to look for when she saw Shen Yun Performing Arts.

“The show was really great … all the flips and stuff, I was really impressed on how gentle and smooth they were landing,” Lily said of the classical Chinese dance performance.

Lily attended the performance on March 16 at the BJCC Concert Hall with her father, Robert Giere, as the two of them attend a special performance for a father-daughter night out every year. This year, Shen Yun was it, and it did not disappoint.

Ladies wearing Yi ethnic dress spun across the stage in rainbow skirts, dancers portraying the Tang Dynasty threw and caught their long “water sleeves” in blue and pink gowns, and fairies practically glowed in their heavenly regalia. The colorful costumes of Shen Yun were a delight, and Lily could barely pick a favorite.

“This was a unique experience to get to taste a different culture, and especially the traditions through the centuries of Chinese culture, so I really enjoyed that and I thought it was really inspiring,” Giere said.

“I think it’s great especially for Birmingham to be able to bring in such different cultures and different troupes like this, I think it’s fantastic. We had a great time,” he said, before asking Lily, “We had a wonderful evening, didn’t we?”

Her agreement was enthusiastic.

Giere added that the orchestra was beautiful, and impressive in how Shen Yun deftly folded in the ancient Chinese instruments along with the more familiar Western string and brass of a classical orchestra.

For the father and daughter pair, Shen Yun showed them 5,000 years of Chinese civilization in the most artful way.

“I thought it was beautiful. We’ve got lives that are very busy and very fast-paced; it’s a wonderful time to slow down and watch some art, beauty, music in front of us,” he said.

With reporting by Ronald Ree.