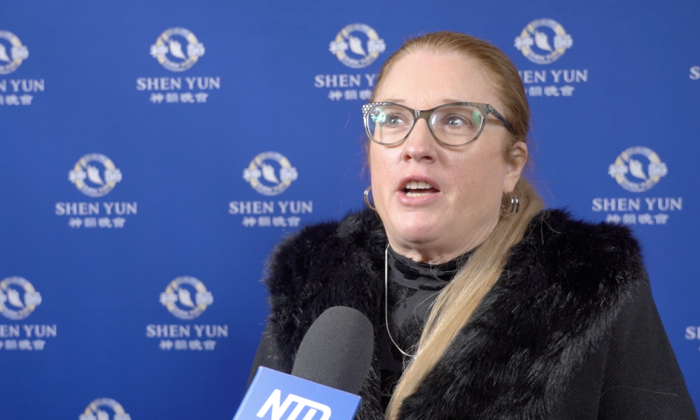 CINCINNATI, Ohio—As the pandemic comes slowly to an end, art lovers are returning to the theaters.

Pamela Childers teaches at the College of Allied Health Sciences at the University of Cincinnati. She attended the Feb. 25 performance of Shen Yun, a performance she has long-awaited.

“It was worth waiting two years for,” she said. “We had bought these tickets two years ago. And then COVID came, and it was canceled. And last year was canceled. So this year, we saw it was coming. And all of a sudden in the mail, we got new tickets and the same seat.”

Shen Yun is a New York-based performing arts company that tours the top theaters around the world, showcasing stories from 5,000 years of Chinese heritage through classical Chinese dance and a live orchestra.

This really shows that these individuals were still dancing, practicing, and putting their heart into something that they could share with the rest of the world.
— Pamela Childers

“I think the arts really took a hit during the pandemic,” Ms. Childers said. “And this really shows that these individuals were still dancing, practicing, and putting their heart into something that they could share with the rest of the world.”

Though Shen Yun celebrates Chinese culture, it is not allowed in China because its program points out religious persecution carried out by the Chinese Communist Party in an attempt to erase faith from civil society. Communism’s atheist vision stands in stark contrast with how Chinese people have lived for thousands of years. Shen Yun’s program highlights the centrality of spirituality in Chinese culture.

Ms. Childers appreciated that aspect, and came away with a deeper understanding of “how oppressive communism can be … and that good usually prevails.”

“I think it’s very important, especially of all we’ve been through in the last two years that you really have to look to some higher being, or some different kind of spiritual thought to comfort you, and give you strength, so you can stand up for what you believe in in the long run. And even if it’s quietly, you can still carry it in your heart,” she said.