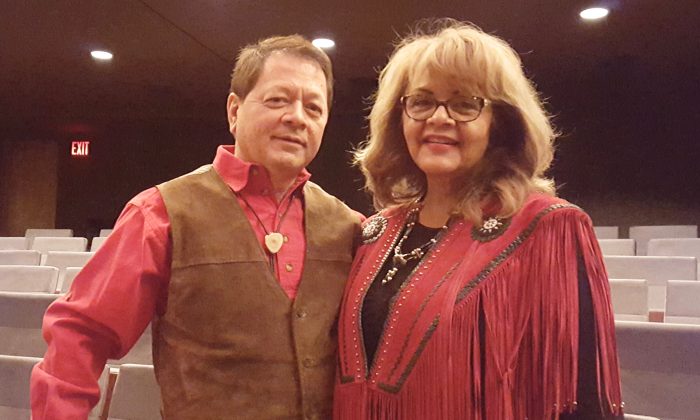 DALLAS—What do traditional Western culture and traditional Chinese culture have in common? According to Steven and Arlene Young, it’s spirituality.

“The Chinese have this saying, ‘God is placed in our hearts,’ even though we may differ on what we may call Him, it’s still the same. There is a divine spirit to help us,” said Mr. Young, a respiratory therapist, after seeing Shen Yun Performing Arts at the Winspear Opera House on Jan. 8.

From the beginning of the performance to the end, the divine’s hand in human affairs is acknowledged. Each of the evening’s individual songs or dances highlights some cherished value of traditional Chinese culture—compassion, loyalty, kindness or bravery—often by telling a story, sometimes through the singing of award-winning vocalists.

The colors the songs and the music it was like heaven on earth.
— Arlene Young

Sometimes this presentation of the divinely inspired culture touches people profoundly. It did for Mrs. Young: “I think the colors, it was like going to heaven. The song the woman sang, too, talked about going to heaven, so the colors the songs and the music it was like heaven on earth.”

The lyrics of the song talk about the singer going to heaven and not wanting to come back [to earth] because heaven was so beautiful. “I cried,” said Arlene Young, a local business owner. She said seeing Shen Yun was like seeing heaven for a moment. “It is like a piece of heaven,” she said. Mrs. Young added she would be buying the photo books so she could re-live the experience again and again.

Mrs. Young was among the first people to give a standing ovation, clapping high above her head during the curtain calls.

Mrs. Young also saw a correlation between Shen Yun and the reason for their attending the performance. “Steve and I came here because of our 42nd wedding anniversary. The song ‘Hope to the Future’ says we are here temporarily, but there is hope. In our marriage, we are here for one another to make a better future as well,” said Mrs. Young.

Aside from the spiritual aspect of the performance, Mr. and Mrs. young appreciated the technical skill of the dancers, as well as the whole colorful experience.

“They are very disciplined performers. They all had to perform exactly synchronized to one another. There was no ego there, it was all humility. You have to be humble to be in sync with one another,” Mrs. Young said.

The movements, postures, and approach of classical Chinese dance are distinctly and inherently those of traditional Chinese culture, according to the Shen Yun’s website.

“There was a lot of dance, colors, and instead of trying to focus on one individual, I tried to see the whole stage with my eyes. The colors and the music, it all blended so well,” said Mr. Young.