Shen Yun ‘The Most Beautiful Spectacle I’ve Ever Seen’ 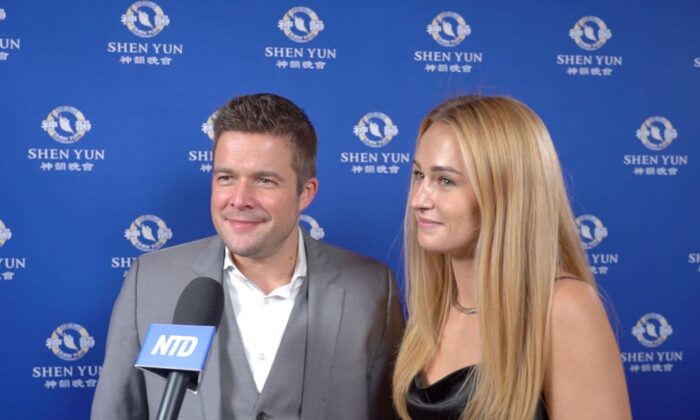 JP Davies and Tracy Price at the Shen Yun Performing Arts at the Aronoff Center for the Arts in Cincinnati on Feb. 26, 2022. (NTD)

CINCINNATI, Ohio—For JP Davies, Shen Yun Performing Arts was “the most beautiful spectacle” he has ever seen.

“Everything about it was wonderful,” he said after seeing the performance at the Aronoff Center for the Arts in Cincinnati on Feb. 26.

Based in New York, Shen Yun aims to revive China’s culture that has been all but destroyed through decades of communist rule in China.

The performing arts company presents classical Chinese dance, accompanied by a unique orchestra that combines classical Western and traditional Chinese instruments, hundreds of colorful costumes, and beautiful animated backdrops that create exhilarating scenes and allow interaction with the dancers on stage through a patented technology.

Mr. Davies said he is sad that Shen Yun can’t perform in China because it’s under the control of the communist regime.

Mr. Davies also noted the spiritual aspects in Shen Yun, and how that is relevant in today’s world.

I think the show really brought that to mind—it brought to mind that you need to have that deep spiritual connection, and we should not ever lose touch with that.
— JP Davies

Shen Yun, Mr. Davies said, was “a connection to your spirit, and a visit to a place that we should all visit more often.”

“It was deeply moving,” he said.

Among the many notable aspects of Shen Yun, Mr. Davies said he was struck by what he described as themes of freedom in the performance.

“The most important thing I took from the performance was freedom of expression. You need to have freedom to be able to perform and express yourself in a way that’s beautiful and can influence others in a positive way. What they did there was the ultimate [form] of freedom of expression, thematically, and through music and through dance—it was wonderful.”

Mr. Davies said that Shen Yun is a “must-see” performance, and people should come to see it for themselves to “experience the energy,” he said.

“The music was so amazing. It was staggering. It was so, so moving. We’re going to come back literally tomorrow night to watch it again.”

“It’s absolutely wonderful. It was beautiful,” she said.

“We really enjoyed it.”