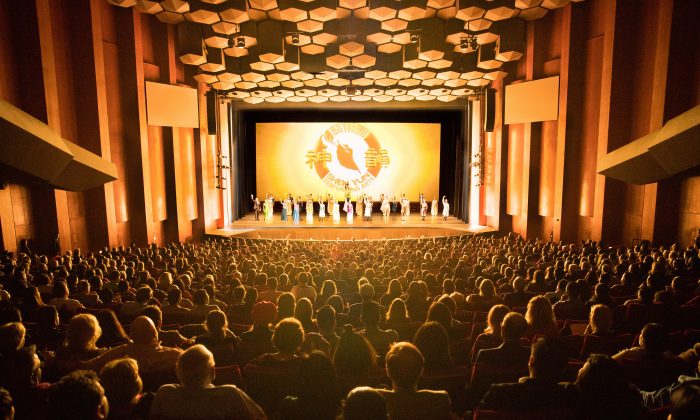 With four simultaneous performances in different cities in North America, Shen Yun Performing Arts started its global tour of the world with all new programming on Friday evening.

“I thought it was outstanding … the technical mastery, the craft by all the performers was astonishing,” commented actor and director Gary Chason after seeing the performance in Houston’s Jones Hall for the Performing Arts.

Mr. Chason also pointed to the deep themes in the performance, saying that each story was “a fable with a moral.” According to the Shen Yun website, China was once known as the “Land of the Divine,” and the ancient Chinese culture “was said to be inspired by the heavens.”

“I think it has a theme of that which is divine—being an important part of the human character, and that is sometimes lost in the hustle and bustle of life and in the political maneuvering that we see going on worldwide,” Mr. Chason said.

Retired pediatrician Dr. Susan Sponenderg found the performance of the soprano and the Chinese lyrics she sung using the bel-canto style, with English translation projected on the backdrop, to be a thought-provoking experience.

“When the soprano sung and the young lady played the piano … [What came to mind was that] there is something positive at the end of it all,” she said.


Over in Burlington, Marianne Reed, academic dean and professor of language arts at the College of St. Joseph, was similarly touched by the soprano’s performance and the deep meanings of the lyrics she sang.

“It was very spiritual, touched you deeply, moved you. And when [the soprano] sang the words of that song about Dafa and compassion and integrity and all of that just … it’s the way we should be,” Professor Reed said.

After watching Shen Yun in Burlington’s Flynn Center for the Performing Arts, painter Che Schreiber was full of inspiration, describing the the performance as “a holistic experience.”

“I was so inspired by Shen Yun with the texture, the fabrics, the colors, and the movements. Every aspect of the performance just touched my heart and inspired my being,” Ms. Schreiber said.

“I really felt the divinity and unification of oneness, and transcendence of pain and the enlightenment of connecting to the greater purpose and passion of what we are meant here to experience.

“The beauty, it is indescribable. You can feel it with your eyes closed … And yet when your eyes are opened, you are just entranced into wanting to dance along.”

In Waterbury, Christina Shortt, artistic director and owner of the dance school Dance Progressions, said she found the classical Chinese dance, as presented by Shen Yun, to be very expressive.

“We don’t need to hear words in order to understand the story,” she said.

Lori Blackwell, a retired construction company owner, simply thought she is in heaven while watching the performance in Waterbury’s Palace Theater.

“I think, if they say, there is an old soul, regenerated, maybe [what Shen Yun presented] was my culture. Because as a little girl, the precision, the honor, is what I love, and I see a lot of that in the show tonight. It is just beautiful,” she said.

In Kansas City, Royce Lane, vice president of sales for a software company, appreciated seeing the variety in the performance and the diversity of the Chinese culture.

“Very interesting to see the different aspects of the culture, how good the dancers are. It’s just very entertaining,” Mr. Lane said.

Donna Welland, a retired stock broker, said she had been waiting to see Shen Yun for a long time.