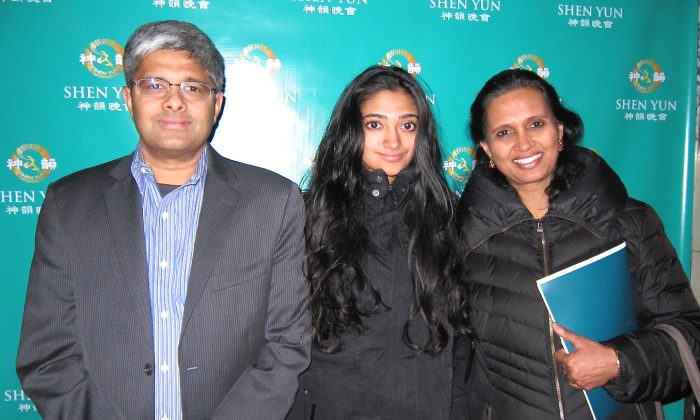 CHICAGO—”Validating, reassuring, and joyful,” were adjectives that meditation studio owner and teacher Ramaa Krishnan used to describe the Shen Yun Performing Arts performance she had just seen with her family at Chicago’s Cadillac Palace Theatre.

“I felt very comfortable with all the themes that were presented—old culture, reincarnation, connection, compassion, meditation—all of these things are themes that I like to think about,” said Ms. Krishnan, who owns Full Bloomed Lotus in Wilmette, Ill.

Shen Yun aims to revitalize traditional Chinese culture through the performing arts. At the heart of its traditional culture is the idea of cultivation, a continual process of cleansing the heart and mind until one’s thoughts spring from one’s divine nature.

From this understanding follows the idea that only when artists have purified their minds will their art be capable of uplifting the spirit. Shen Yun artists take this belief as the bedrock of their work.

Through classical Chinese dance, through songs expressing the relationship between the human and divine, New York-based Shen Yun puts spirituality front and center.

“So beautiful, so beautiful! Both of the songs were very, very inspiring,” Mrs. Krishnan continued. “I particularly like the first one—the last line of the first song—the last line when it said, ‘Your salvation is in your own hands.’ I just love that, because it’s what I always think, believe, (and) teach.”

Also attending the Saturday, March 7 evening performance with Ms. Krishnan was her 16-year-old daughter. Amrita works in scratchboard art learned from her grandfather. “I thought it was beautiful. It was such a great way of honoring such a great culture,” she said.

She hopes to incorporate “all of the color and movement” in her art.

Her father, Krish Krishnan, Harvard educated and president of DST IT Services, thought the performances were phenomenal because of the color, action, energy, and dynamism.

Having been to China, Mr. Krishnan understood the effect of communism on Chinese culture, and that a “different underlying truth” lay beneath the imposed system.

“The Cultural Revolution (1966–1976) was catastrophic for China’s traditional culture. During this unprecedented massive political movement, China’s 5,000-year-old culture was almost entirely wiped out,” as Shen Yun’s website makes the history of the regime’s impact on culture clear.

This opposition is depicted in the last dance of the program in which people of faith are beaten by police until Heaven intervenes.

For Mrs. Krishnan this dance “was dramatic, but reassuring.” She thought its theme was “Even in the most difficult of times, you are never alone. …. That was very nice to know. So [the whole performance] seemed to close on a good note, a reminder that no matter how bad the times, that we need to remind each other and ourselves that we are never alone.”

Or, as Mr. Krishnan put it, “I thought it was very good. There is hope, right?”