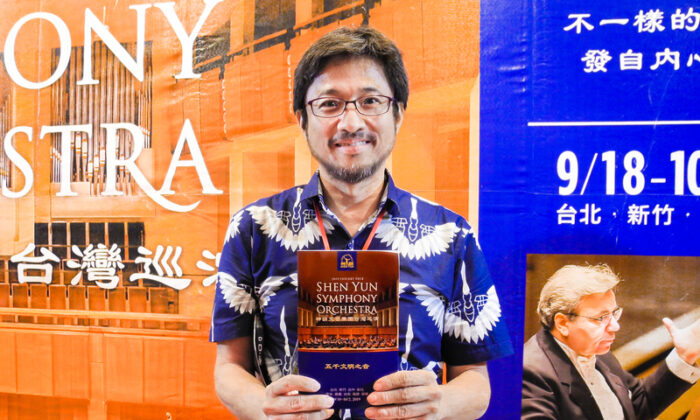 TAIPEI, Taiwan—“I think watching Shen Yun performance can get special energy of telling the truth openly and uprightly, which is what the world and the society really need nowadays,” said Han Zhenan, general manager of a Taiwanese construction company, after he attended Shen Yun Symphony Orchestra’s performance at the National Concert Hall on the evening of Sept. 23, 2019.

Experiencing Shen Yun music’s positive energy and soul-healing effect, Han Zhenan said, “Since we are busy working in this bustle and hustle society that is full of messy messages and dishonesty, I think attending [Shen Yun] is of great benefit to our souls.”

“I was truly captivated by [Shen Yun’s] music,” he added. “Its tempo fluctuations, as well as rhythms, can touch and comfort the human heart.”

“When listening to the music, I felt especially peaceful in my mind,” he further explained. “It can help us create the mood for a relaxing and comfortable ambiance in the hustle and bustle of everyday life.”

“Shen Yun’s all-original compositions feature the perfect harmony of classical music, East and West.” “First, the Western orchestra serves as a foundation, accentuating the distinct sound of Chinese instruments. Second, the bedrock of soul-stirring melodies from the ancient Middle Kingdom is fully brought to life by a Western symphony,” according to Shen Yun’s website.

Hearing the seamless harmonization of the traditional Chinese musical instruments and Western instruments in Shen Yun Symphony Orchestra, Han Zhenan said, “The perfect synchronization of East and West music is hard to find.”

The general manager was pleased to find that hearing the Shen Yun performance has many benefits for him. He said, “[Shen Yun music] makes me more mature, and gives me wisdom and compassion to deal with many problems that I have to face in my life.”

“After returning to our workplaces with our souls cleansed by this musical concert, our values may be different in terms of our lives, daily work and many other things that we have to face,” he said. “This is the biggest benefit I’ve gained [from the Shen Yun concert].”