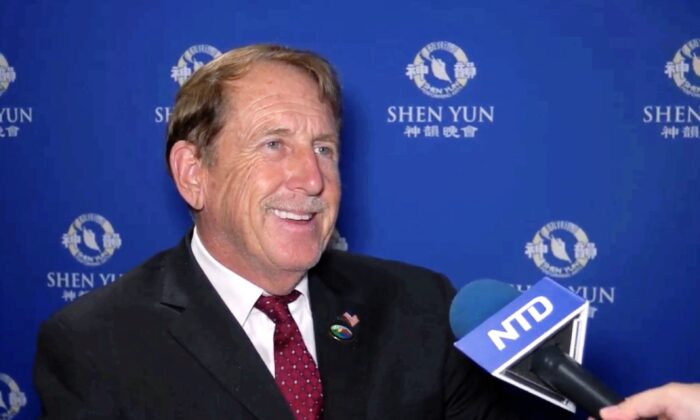 Scott Voigts attended Shen Yun Performing Arts at the Segerstrom Center for the Arts in Costa Mesa, Calif., on May 19, 2022. (NTD)

COSTA MESA, Calif.—New York-based Shen Yun Performing Arts’ unique mission is to revive authentic Chinese traditional culture to the stature it enjoyed in China’s pre-communist era. Its story-based classical dances and music are a source of entertainment and education and its messages have profound meaning for many people who attend the performances.

One such person was Scott Voigts, who was attending a Shen Yun performance at the Segerstrom Center for the Arts in Costa Mesa. Mr. Voigts is a Lake Forest city council member and District Director to Orange County Supervisor Donald Wagner, Third District.

“I’m amazed [with] the pageantry, the special effects. I never dreamed that the stage would interact with the screen. The stage presence is just beautiful, the way that the divine came down from heaven onto the stage is just magical,” said Mr. Voigts. This feature is enabled by Shen Yun’s patented 3D technology that enables a dynamic but smooth transition between the projection and the stage action.

“It’s an amazing [performance]—more than I thought it would be. It’s been a true blessing,” he said.

One of the pieces features a scene where a divine being descends to earth.

“I’m a man of faith and I believe that it’s important to live by faith—I think that the faith is instilled in [Shen Yun.] There is a divine God. God wants to be with us and walk with us, and for us to do good. And so I think that the goodness … is reflected. [Shen Yun] is magnificent entertainment but [a] spiritual adventure,” he said.

“I think that we have to hold fast to doing good and doing good for others, because I think there’s a temptation,” he said. He believes Shen Yun transmitted a message about temptation.

He applauded Shen Yun’s vision of bringing back the original culture of China’s 5,000-year-old civilization.

“It’s a beautiful [performance],” said Mr. Voigts. He was particularly taken by the dance “Plum Blossom in Spring,” describing the beautiful pinks as being amazing. The athleticism of the dancers was also magnificent and Shen Yun is a testimony to the beauty of the ancient Chinese culture, he said.

“It was beautiful,” said Ms. Brunner, who was attending Shen Yun for the first time. Ms. Bruner is a singer who also plays the piano, guitar, and drums.

She praised the “Plum Blossom in Spring” and “Water Sleeves” dances. “They just really stood out to me—with the colors and their costumes,” she said.

The couple agreed that Shen Yun’s orchestra was amazing. The orchestra is a unique combination of classical Western and traditional Eastern instruments.

“They are very, very good, world-class. It was [an] amazing combination. They’re very in sync with the performance,” said Mr. Tafolla. Mr. Tafolla is an instrumental player who has taught in countries worldwide.

Mr. Tafolla was also familiar with the culture in today’s China, as he had visited the mainland on many occasions, staying for extended periods of time. He was very pleased that Shen Yun was reviving China’s ancient culture.

“I liked the interaction between the screen and the dancers on stage … I hadn’t seen that before. So I thought it was really great,” he said.

Mr. Tafolla connected with the spirituality in Shen Yun. “And I think that is the part that has drawn me to [Shen Yun] before. Several years ago, when I saw it, it was a very spiritual event.”

The persecution of the ancient spiritual practice Falun Dafa is also featured in the dances. Falun Dafa originates from the Buddhist tradition and is based on the values of truthfulness, compassion and tolerance.

“I’m very aware of the persecution,” said Mr. Tafolla. He was surprised to see the persecution included the program but glad that Shen Yun had done just that.

“For awareness,” he said, “Because it’s something that’s not talked about. And in today’s … Western culture people typically go on about their lives and as long as it’s not affecting them on a daily basis, it doesn’t resonate with them. I was taken by it, it really broke my heart.”

Ms. Brunner agreed. “I wasn’t expecting that. But it’s very important to know.”

“We all need hope, joy, and we need to have a vision for the future. And this is a wonderful thing for people to come out and see and to experience a new culture. And again, I’m surprised and very glad that they are showing a different side of the culture that I wasn’t expecting,” said Mr. Tafolla.

Mr. Tafolla said that Shen Yun improves year by year while Ms. Brunner congratulated the performers and said she would be coming back.