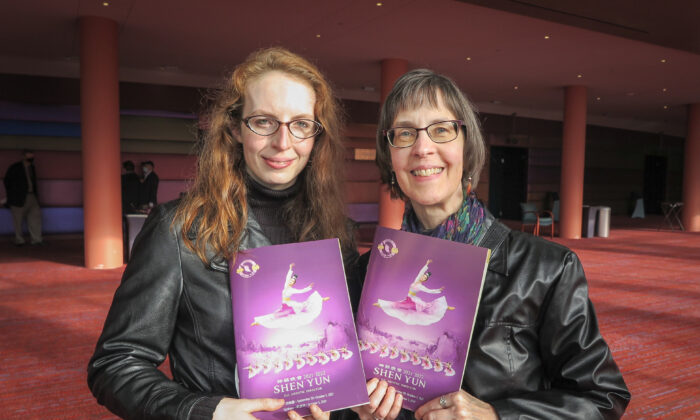 SEATTLE—For Susan Sinclair, whose life has been filled with music, dance, and spiritual healing, Shen Yun Performing Arts had her in her element as she attended the matinee performance with her daughter, Vesper.

“It was magnificent. Everything was so beautifully done. The narration was as much of a performance as the singers and the dancers. Everything was the very highest caliber,” Sinclair said.

“I had been looking forward to this for years. And yes, it was just beautifully, beautifully done,” she said.

“The costuming is just extraordinary. The skill of the dancers and the message, you can tell it’s really shining right from their souls,” she continued.

Sinclair said she thought that many “cultures have been trampled on by what we would call modern civilization or certain ideologies.”

She said that people do need to go back to what was beautiful and find from older cultures what elevated the human spirit.

“So yes, it would be very important that these values be restored,” she said.

Sinclair is an energy healer as well as an administrative assistant for a dance studio. She also dances and plays the piano. She was able to relate to what she saw in Shen Yun with her day-to-day life.

“Knowing that harmony is a traditional Chinese value was really meaningful to me because that is something that I truly value in my spiritual work,” Sinclair said.

“And in the work I do, even at the dance studio, I bring harmony when there can be disputes or difficulties between clients and between the dancers and the teachers,” she said.

“So I understand the value of harmony. And it is very important right now, more important than ever,” she said commenting on the divisiveness she sees in the world.

The understanding of balance and harmony would be tremendously restorative and help us all to have more hope for the future.
— Susan Sinclair

The name Shen Yun means ‘the beauty of divine beings dancing,’ something that she said is fitting after having seen the performance.

“As someone who works with the soul and the spirit, that’s where I would say it comes from: their soul, and their heart, and their take on the world, their beliefs, what they believe is true, is what they are expressing,” she said. “That’s why I really love the meaning of Shen Yun because I thought that is exactly it. Divine beauty expressed in physical form.”

“You could tell they were choosing stories that had a theme of redemption, of recovery from potential disaster. So that was very clearly expressed. They had many different stories. But there was always this theme of things can go very wrong. And they can be made right,” she said.

“There’s often a requirement of divine intervention. Sometimes it’s so messed up that the people can’t fix it without help. And I think that is probably true at this point, too, that we do need help from a higher level, a higher source.”