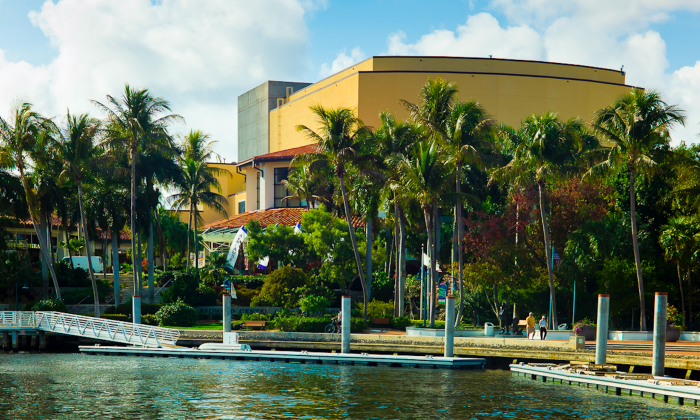 FORT LAUDERDALE, Fla.—Sylvia Amora-Ona saw Shen Yun Performing Arts for the first time, with her friend Maria Cueves, and both felt inspired to learn more about Chinese civilization and spirituality. Shen Yun left her with “beautiful memories.” She said, “It was absolutely magical … I’m going to learn more about Buddha.”

The two are retired librarians. Ms. Amora-Ona was touched by the dance piece depicting the Buddha protecting the people.

“The Buddha, that part was wonderful,” she said. “It’s like God is always there for you. So whenever they needed divine help, they showed up and helped the citizens, or the people of China.”

The dance, the orchestra, the costumes and the digital backdrop are Shen Yun at first glance. According to the Shen Yun website, “digging deeper, one discovers a sea of traditional Chinese culture. Mortals and divine beings merge on stage as one. Principles such as benevolence and justice, propriety and wisdom, respect for the heavens, and divine retribution, all come to life, washing over the audience. Originating from Confucianism, Buddhism, and Taoism, these ideals are the essence of traditional Chinese culture.”

Speaking at Au-Rene Theatre, Broward Center For The Performing Arts in Fort Lauderdale on Jan.10, the two friends were full of joy and curiosity. “It was wonderful, beautiful, beautiful. I enjoyed it so much. I wish I could come next year again to see it,” said Ms. Cueves. If she does, she will see a complete new performance. Shen Yun creates a new one each year.

Ms. Cueves hopes the artists will hear how grateful she was for the experience. “Thank you for this performance, it was beautiful. Beautiful. I don’t have words to express how beautiful it was.”

In her opinion, the dancers conveyed themes about kindness and spirituality. It made her want to learn more. “We have to learn more about China culture.”

Ms. Amora-Ona felt the same way. She enjoyed Shen Yun’s themes about “goodness and going to heaven, and being good, and we’re all here for a short time. I got the message to be kind to each other. You learn about the Chinese culture and appreciate it.”

At the same performance, Ms. Sandra Castillo, a medical technologist, said, “I am having the best time of my life!” She said it was hard for her to put her feelings into words, but:

“It is very sweet and very impressive how they show their discipline when they are dancing, because it is, everything is in place, the music, the movements. When you see the show, you get the experience. I got goosebumps. Yeah, really, because they transmit the message.”

Like her fellow audience members Ms. Amora-Ona and Ms. Cueves, Ms. Castillo found themes about goodness and hope in the stories of Shen Yun.

For example, in the final dance, a couple were in danger from a dictatorial regime, that tried to stop them from meditating, she said. But then, divine intervention helped them. “They got the light from Buddha, so they give you the hope, so they can meditate and can go home, and their truthfulness, so it is beautiful, how they got released after all. It does not matter how bad the other people are, so it gives you the impression that they are doing well, they are good people. ”

Ms. Castillo said Shen Yun was more than she expected and more than she could express in words, she wants to go back and see Shen Yun again. “Everything is beautiful … It’s brilliant, it excels your emotions, very impressing.”