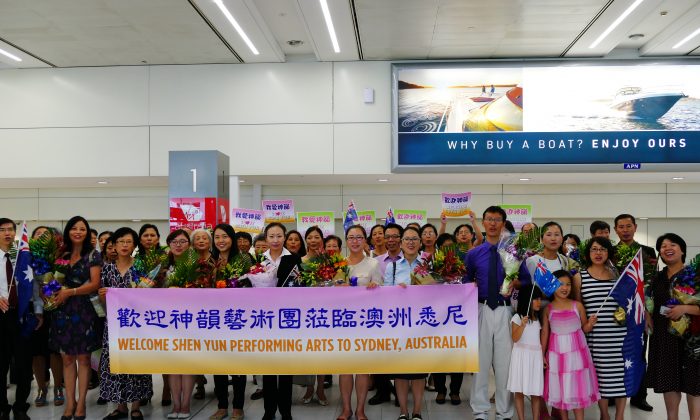 QUEENSLAND, Australia—Breathtaking, emotional, powerful, graceful, energetic, and courageous—from Brisbane to the Gold Coast and Toowoomba in between—theatregoers had said it all. Others were dumbfounded, unable to express what was in their hearts. Most definitely, they all want Shen Yun Performing Arts World Company to return next year.

Meanwhile, the New York-based classical Chinese dance and music company will continue its 2016 World Tour to Sydney from March 8 to 13 with just seven shows before flying to its Asian-leg of the journey.

Shen Yun especially came to the sub-tropical state bringing with it a special gift from ancient China, known since ancient times as the “Celestial Empire,” the company website says.

For sisters, June Singleton and Mavis Gardiner, the gift of tickets to see Shen Yun at the Lyric Theatre on Feb. 27 was very special.

“It was beautiful. It lifted us out of the violence in the world now. It just brought beautiful things and peace and happiness. And all the performers, they were so happy and perfect,” Ms. Singleton said.

Ms. Gardiner felt she had also been transported to another realm: “Up there somewhere, my soul soared. It took me up there, my soul went up there. I was just wrapped in the whole thing. It was wonderful!”

Ms. Singleton, a retired school teacher, had bought the tickets as a gift for her sister, sensing Shen Yun was something she had to share with her sibling.

The company’s website tells us that for 5,000 years divine culture flourished in the land of China. But, humanity’s treasure was nearly lost under communist rule.

That’s when Shen Yun stepped up: “Through breathtaking music and dance, Shen Yun is bringing back this glorious culture,” the website says.

Since 1999 the communist party in China has persecuted the ancient form of spiritual practice, Falun Dafa, highlighted in a couple of dance stories.

“When I see what they portray here, some of the things that have come out of persecution, I think it is wonderful that they have the courage to go on and do what they are doing. Absolutely [I’ll] compliment them,” Mr. Williams said.

The website continues: “Shen Yun captures a deeper meaning, describing a land where the divine and mortal once coexisted, referring to the belief that the divine, through various dynasties, transmitted a rich and abundant culture to the Chinese people.

“Chinese culture is thus known as ‘divinely inspired,’ and is the only culture in the world to have a continuous recorded history of 5,000 years.”

Retiree Frank Roper was in the Toowoomba audience March 2, soaking up the atmosphere created by Shen Yun’s depiction of divinity, saying the “divine aspect has not been spoken of enough,” he said.

“The divine aspect is who we are … When people realise that we are one, the sooner things won’t be so bad,” he said.

Recapping, Mr. Roper said the erhu (ancient two-stringed Chinese violin) virtuoso, Linda Wang, touched his heart. “It was all from the heart. I was picking up feelings of love, forgiveness, consciousness; it was all rolled in together. It touched my heart deeply.”

“Fabulous, perfect singing, great voices. You could feel the vibration coming from her voice all the way through to the balcony.

“Once again the feelings coming through from the performance were just very good. I’ve never experienced anything like that before.”

Running through the Shen Yun program is a theme that heavenly help is here, Mr. Roper said.

“People need to stop what they are doing, wake up, smell the coffee and realise what is going on.

“There is a heartfelt evolution going on worldwide and many countries are involved—and I think it’s a very good thing.”

In 2006, the company decided on a mission to reawaken this ancient treasure through the performing arts.

In so doing, Shen Yun has traversed five continents, visited more than 100 cities and performed on the most prestigious stages reaching countless numbers so they may receive the ancient gift to humanity—to be true, kind and forgiving.

Totally immersed in the March 4 opening night at the Gold Coast Arts Theatre, The Arts Centre, was local couple Alison and Graeme Geale.

Mrs. Geale is a director of sales and a committee member of the Gold Coast Business Excellence Awards.

“Wow! I am super impressed technically. Timing, music, use of multimedia with the dancers, but I am also touched by the story,” she said. “So it emotionally grabs me and technically grabs me straight away.”

Mr. Geale, an English and drama teacher, said he had never seen anything like Shen Yun and words could not explain his experience.

“This performance is absolutely marvelous,” he said. “It’s incredible! It’s a feast for the eyes and the ears, and the imagination. I’m loving it!”