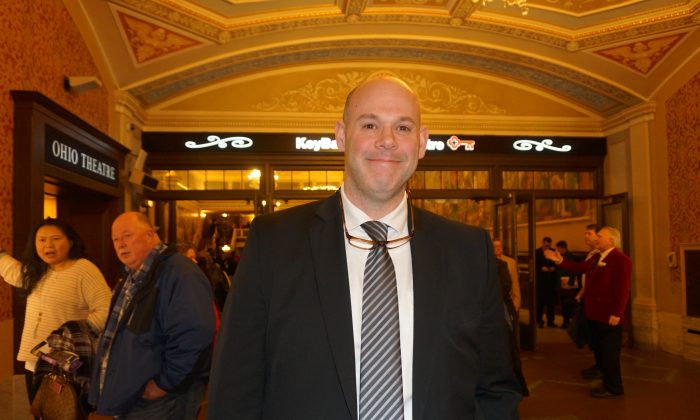 CLEVELAND—Mike Patrick originally thought Shen Yun was just going to be about the history of China, but when he saw the performance he realized what appealed to him most were some of the more kind and simplistic aspects of the culture that go beyond the retelling of history.

Patrick believes that culture in general is missing from our lives,and what we’re missing from it is the meaning behind four primary questions which he believes are suggested throughout the Shen Yun performance: Questions of origin, meaning, morality, and destiny.

“And, those four questions I think every worldview, every culture, every individual has to answer for themselves,” he said.

According to Shen Yun’s website, the company aims to, with the universal language of music and dance, weave together heavenly realms, ancient legends, and modern heroic tales, to take the audience on a journey through 5,000 years of Chinese culture.

Patrick felt that, in answering these four questions, Shen Yun got to the essence of culture and also showed the importance of culture.

For instance, the very fact that Shen Yun cannot perform in China today, where a communist regime actively suppresses the traditional culture Shen Yun seeks to revive, can show us what the lack of culture creates, Patrick explained.

“I think it speaks to the danger that I think a communist government brings when they come to power and that is lack of thought, lack of freedom, lack of freedom of religion,” Patrick said.

The topic was brought up in a modern-day scene in the performance, Patrick said, and it showed things, such as communist ideology, “that I think are dangerous to us in our culture and stand as a warning to us in America that we need to be mindful of what we allow politically in our country so that it does not lead to a loss of freedom that we have.”