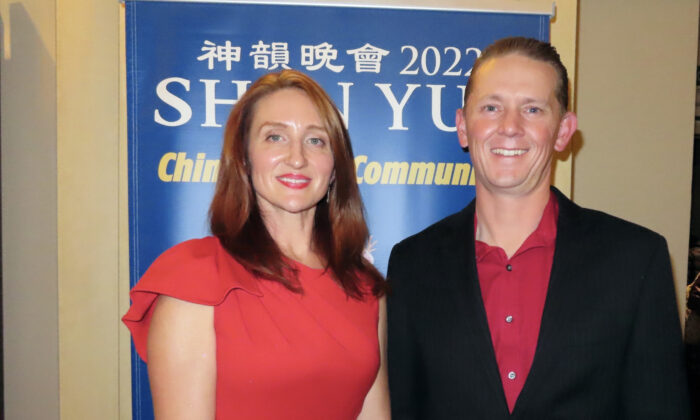 Amanda Noel and her husband at Shen Yun Performing Arts at California Center for the Arts in Escondido, Calif., on Jan. 14, 2022. (Alice Sun/The Epoch Times)

ESCONDIDO, Calif.—An audience member attending Shen Yun Performing Arts in Escondido said she found the evening like finding a slice of hope and happiness amid the unknowns and stresses of the pandemic.

Amanda Noel, a pharmacist, shared about the positivity she felt from her Shen Yun experience.

Thank you for bringing that to us during such a difficult time.
— Amanda Noel

She expressed her gratitude to New York-based Shen Yun for putting on their production.

“Thank you for bringing that to us during such a difficult time,” Ms. Noel said.

She added that given the opportunity, she would definitely see Shen Yun again, and she recommended more people come to experience Shen Yun for themselves.

“Oh, absolutely. I would do it again. And I would absolutely recommend anyone who’s not seen it to come and see,” she said.

Shen Yun’s dancers are trained in classical Chinese dance. This dance form has thousands of years of history and is one of the most comprehensive dance systems in the world.

“I would say it was spectacular. It’s just magical to watch,” Ms. Noel said.

An ‘Escape Into Chinese Cultural History’

Dan Gervais, CTO of Troparé, was also in the Escondido audience. He complimented the performers on their dedication to putting on a beautiful performance in the pandemic.

“I think the performance shows a lot of people [are] still dedicated to doing things artistically,” he said. “[They are] showing that there’s still a lot of color, a lot of vibrancy in the world.”

He added that he felt coming to the performance was time well spent: “I’d say that it’s [a] worthwhile escape into Chinese cultural history through the art forms of dance and music and singing.”

Shen Yun is committed to showcasing “China before communism.” Their dances feature the many ethnic groups of China, as well as the scenes and stories from the ancient to present day.

One of the dances that impressed him the most was the plum blossom dance. The dancers’ use of elaborate props extends their bodies to create a visually stunning performance.

“The way that they’ve synchronized all of the different fans … I think it was visually stunning,” Mr. Gervais said.