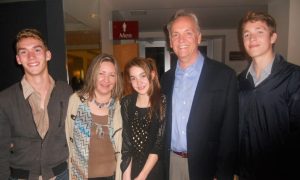 HOUSTON—In the two exhilarating hours Shen Yun Performing Arts performed at Jones Hall for the Performing Arts on New Year’s Day, the audience journeyed through different regions of China and saw 5,000 years of Chinese history come to life on stage.

“We’ve learned about the regions, we learned about what the last 5,000 [years] has evolved, the belief systems, the values, the real important things that have stayed part of the Chinese culture for centuries,” said Philip Gerbino, who was the president of the Philadelphia-based University of the Sciences before retirement.

“The way [Shen Yun] has done this is magnificent. [Shen Yun] told history through stories, through regions, through ethnicity, and there’s no better way to learn,” said Dr. Gerbino.

“It’s so important to tell history through stories. The Chinese have such a great long culture, that there’s so much to tell. Each of the regions are different, each of the ethnicities are different, and I didn’t think [Shen Yun] could pull all of this together.”

After seeing the performance, he was convinced that Shen Yun had indeed accomplished this task.

Dr. Gerbino said everyone should see Shen Yun and that audience members of all ages would be able to learn something from it.

“It’s important that children see this, that generationally this continues, [and that] both young and old should see and understand … This has a full story for everyone,” he said.

He commended the performers for their dedication to reviving China’s traditional culture.

The piece that stood out the most for Dr. Gerbino was The Power of Compassion, a dance piece set in modern day China.

The piece shows the compassion of practitioners of the spiritual discipline Falun Dafa in the face of severe persecution by the ruling communist regime. Their kindness moves the heart of one policeman who has come to arrest them.

“I was just struck by the story … it really touches you,” Dr. Gerbino said.

“The artistry is magnificent. The story is wonderful. … The story of compassion is what really touches you the most.”