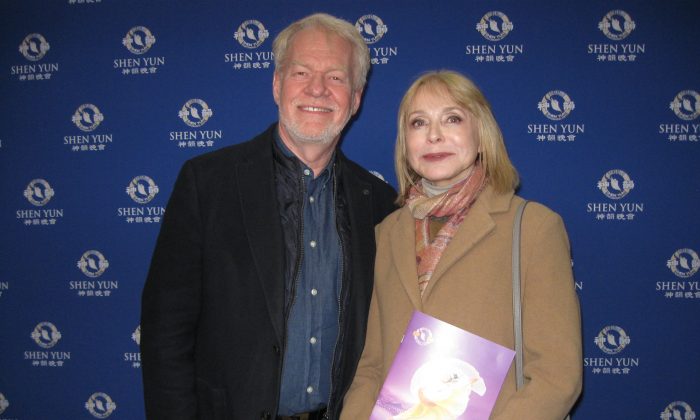 MISSISSAUGA, Canada—Canadian film and TV producer Leif Bristow and his wife Agnes Bristow, a writer and producer, have attended Shen Yun many times over the years and have never failed to be impressed.

Among the couple’s accomplishments is the family-friendly TV series “Wildlife Quest,” starring their daughter Brittany, and the mini-series “Rising Suns,” a drama about a wealthy family that has come to Canada from China.

The Bristows saw Shen Yun at the Mississauga Living Arts Centre in Canada on Jan. 12, as the New York-based performing arts company continued the Canadian leg of its global tour.

“The show was magnificent,” said Ms. Bristow. “I really enjoyed it. It was humorous. It was visually beautiful. The choreography is magnificent, as always.”

“I always feel uplifted when I come to see the show,” she added. “It’s very rich and everything you can imagine. The music is so beautiful and when I’m sitting in the audience, I feel like I’m transported somewhere else.

“And the combination of all of the different components: the live orchestra, the dancers, the singers, the piano, the erhu—I loved that!”

“I loved this performance. It was quite exceptional,” said Mr. Bristow, noting the high caliber of the performance overall.

“I kept noticing how beautiful and unique each dance sequence, the wardrobe, and costumes were. They’ve really done it really elegantly. The blend of colors, the style of coloring, and just integrating the costumes into the dances is really beautiful.”

They both singled out the erhu solo for special praise.

“It was one of the most beautiful solos I’ve heard in a long time. It was really captivating,” said Mr. Bristow.

“It’s amazing, especially when you consider it only has two strings. It can be one of those things that’s very haunting, yet it can be very light and it can have a very refreshing sound to it. It really makes you feel something. It’s such a unique sound and it’s very unique especially for North American ears or Western ears. It’s really quite beautiful.

Ms. Bristow also drew a theme from the production, which draws from China’s rich and mystical 5,000-year-old history and culture.

“It’s good ultimately overcoming evil,” she said. “If you work at it, if you try, if you do good in this world and you strive to be a better person, you strive to do good things and other good things will come from it.”

Shen Yun embarks on an extensive international tour each year as part of its mission to revive authentic Chinese culture—a culture that was all but destroyed by violent communist campaigns such as the Cultural Revolution. This year, Shen Yun will visit over 130 cities to present the Middle Kingdom’s magnificent traditions onstage.

“History and tradition are important because it’s those elements of our cultural history and who we are as a people that help us progress forward in the future and become what we convey to the world,” said Mr. Bristow.

“Being able to bring back, say, art forms and a history that for many people is lost—and outside of China most of the world wouldn’t have known about it anyway—so to be able to expose people to the depth of that history of dance and culture is a wonderful way to bridge cultures. I think in that regard it’s really wonderful.”

“It’s the beauty of being good and being honest and true to yourself, and true to the people around you, and always trying to be in a better place in your life. I think if you can achieve that then you can pass that onto others,” she said.

Shen Yun performers all practice Falun Dafa, a spiritual discipline handed down from ancient China rooted in Truthfulness, Compassion, and Tolerance. Besides rigorous physical training for Shen Yun, the dancers meditate daily, and discipline their own characters through quiet self-reflection and striving for spiritual ideals.

“I consider myself a friend of Falun Dafa,” said Ms. Bristow. “I actually try to meditate every day and I try to do some of the exercises. And I think it’s the generosity and kindness of the people [who practice Falun Dafa]—no judgement and peacefulness is what I feel from them and what I get when I’m around them.”

Classical Chinese Dance is a complete dance system that developed in China, and it is distinct from forms in the West such as ballet.

“It’s such a different art form,” said Mr. Bristow. “Especially for most audiences around the world today, because you’re dealing with an art form that goes back so many thousands of years.”

Classical Western ballet originated from its own set of structures and forms, he said, and the movements he saw on stage were rooted in tradition but “very different as compared to seeing the European or the North American ballet.”

Although slow and graceful, classical Chinese dance can also be very athletic and involve tumbling, spins, and leaps.

“I just watch it and I kind of marvel,” said Mr. Bristow. “It’s just so beautiful and it’s so graceful. It is a lot of fun to watch.”

The live orchestra is something that Mr. Bristow appreciated as well from his stage production experience in Broadway musical-style productions. He recalled that in the original days of cinema there was a live piano, then an organ, and then even orchestras accompanying the film. Later music was incorporated into the film stock itself instead of being performed live.

“Whether it’s film, whether it’s stage, each element has to elevate the other, so music has to support and advance the storytelling in the same way that the dance or other art form does as well. To see the way it’s done is really beautiful,” he said.

“The fact that each piece is specifically written and composed for the dance just makes it that much more magical.”

Ms. Bristow said every time she sees the show it always leaves her feeling uplifted, and this time was no exception.

“When I leave the show I feel like I’m floating out, because you just feel so—like all of the worries of the world have been taken off your shoulders and you feel like you are in a better place,” she said.

“To anyone who hasn’t seen it I always just say it’s a beautiful, magical couple of hours where you get to see a side of cultural performance that very few audiences get to see.”

With reporting by NTD Television, Lisa Ou, and Carrie Gilkison.