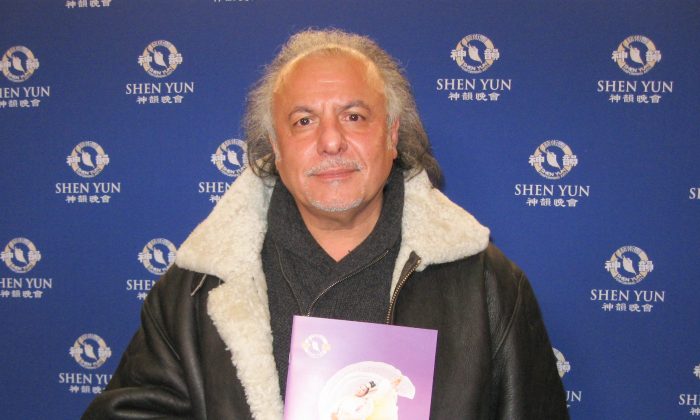 MISSISSAUGA, Canada—Kiu Rezvanifar, president of the Canadian Ethnic Media Association, had heard good things about Shen Yun Performing Arts before seeing it last year. But it was no replacement for experiencing it in person, because he still remembers that feeling of “wow!”

After his tremendous experience, he returned this year on Jan. 11 at the Living Arts Centre in Mississauga, Canada, and this time he brought along a group of friends to share it.

The China that New York-based Shen Yun aims to revive is a 5,000-year-old civilization that is said to be divinely inspired. Through classical Chinese dance and original music, the company means to share the authentic traditional Chinese culture with the world.

“China is one of the longest and oldest cultures, civilizations on the planet—a lot of people don’t know about it,” said Rezvanifar, who is also the founder of KVC Communications Group, a company specializing in communications and broadcasting. His life’s work has been in bridging understanding between cultures.

Rezvanifar is also a seasoned television and documentary producer, as well as the publisher of Persian Tribute Magazine, the first English language publication targeted toward the second generation of Iranian Canadians. He has been involved as board member of several local and national organizations and was honored by the Canadian government with two prestigious medals for his contributions to his community and Canada.

“The more you know about each other, the more we can appreciate each others’ contribution to the culture,” he said. “So tonight, and this event, in my opinion, is one of the most important ways of learning about Chinese culture and their traditional history as well.”

Rezvanifar suggested Shen Yun is so effective because the quality of the production. He said the skill and artistry of the performers is also top-of-line.

“The colors, the performance, the singer—everything about it is amazing,” he said. “This is something I don’t think I’ve ever experienced before, and it’s a combination of a lot of beautiful things.”

Shen Yun is the world’s premier classical Chinese dance company. The dancers, many who are award winning in their field, perform classical Chinese dance as well as ethnic and folk dances from China’s 50-plus ethnic minorities. Many of the dances tell stories with the help of a unique animated backdrop and a full orchestra peppered with Chinese instruments, playing original compositions.

“A lot of professionally and expertly executed movements, color, music, choreography, and also history. And the way that they tell us about the Chinese culture, this is beautiful,” he said. “I really enjoyed it.”