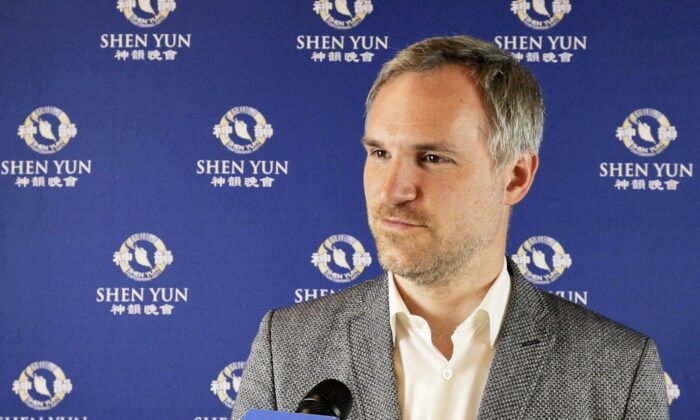 The mayor of Prague, Zdeněk Hřib, at the Shen Yun Performing Arts performance at Prague Congress Center on May 29, 2022. (Michal Kováč/NTD)

PRAGUE, Czech Republic—As the world learns more about China and its government, people are speaking out and expressing empathy for people like the artists of Shen Yun Performing Arts who are dedicating their lives to raising awareness of what is happening in China.

The mayor of Prague, Zdeněk Hřib, attended Shen Yun at the Prague Congress Center on May 29 and shared his thoughts on the company’s mission.

“I understand that the position of artists like Shen Yun is very difficult in China. I don’t think many people can imagine the crazy things that are happening in China,” he said.

He specifically pointed out the persecution of Falun Gong practitioners in China. Falun Gong is a spiritual practice that benefits the mind and body. Due to its growing popularity during the 1990s, the then head of the Chinese Communist Party, Jiang Zemin, decided to crack down on the peaceful practice.

“I would also like to say that the position of Falun Gong practitioners in China is very difficult, and I feel very sorry for how the Chinese regime treats people who represent the traditional true Chinese art,” said Mr. Hřib.

“For me, it was like opening new windows and looking into history, which is enlightening and it leaves an artistic impression. They are fantastic, everyone, the orchestra, the conductor, I enjoyed it to the last minute,” shared Mr. Surka.

“As a musician, it was very inspiring for me—different culture, different emotions. The orchestra played live, beautifully [and] in style,” he said.

The Chinese culture seen in Shen Yun is a real presentation of China before communism. Using dance and music, the artists share the beauty of that culture with audiences around the world.

“It was my first time seeing this beauty. Dancing is the hardest profession because it’s so physically hard and when you watch those professional dancers, you get the feeling that they’re just flying, but at the same time it’s so hard. I’m not a dancer, but I know this from fellow dancers I’ve accompanied as well,” said Mr. Surka.

Shen Yun uses a patented digital backdrop to extend the stage. The projection allows the artists to travel to the ends of the world and beyond.

“The animation coupled with the transition into physicality and the dancers and the choreography, the build-up … from a professional standpoint, I know what it takes to make it work,” said Mr. Surka.

“I also felt that it was a kind of message, a kind of spirituality, a return to values that we really miss. It was a kind of invitation, to reflect and understand that belief in oneself.”

He added that the introduction of Falun Dafa, “was enlightening and now of course it’s up to everyone how they feel and reflect.”

“In addition to the artistic experience, the visual experience, it’s also a reflection on faith,” he said of Shen Yun.