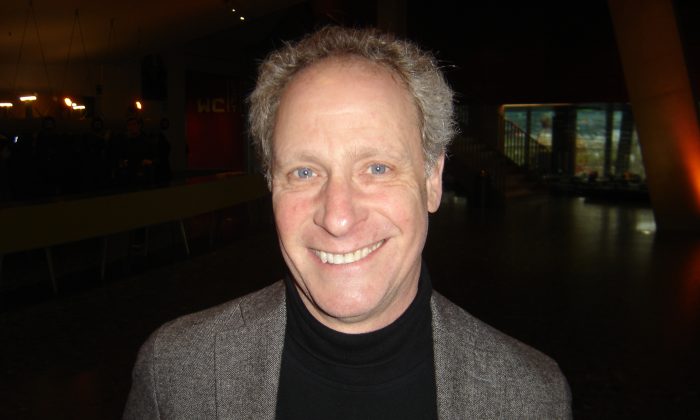 ROTTERDAM, Netherlands—On stage, dancers clad in jewel-toned costumes brightened the stage as Shen Yun Performing Arts brought 5,000 years of Chinese civilization to life, beginning the tale of divinely-inspired culture with a scene of heaven. And below the dancers, in the orchestra pit, was a unique ensemble blending both Western classical and ancient Chinese instruments that told the story every bit as much as the visuals above.

“It’s absolutely beautiful, it’s gorgeous to watch, it’s an incredible production to listen to, the music is so incredibly fitting for the performance, the orchestra plays brilliantly well, so well prepared and rehearsed, a lot of emotion,” said Randy Max, principal timpanist for the Rotterdam Philharmonic Orchestra.

On Feb. 6, he saw the New York-based classical Chinese dance company at the Nieuwe Luxor Theater, not far at all from the De Doelen where the Philharmonic usually plays.

“You feel the history, the music fits so well with the whole visual experience,” Max said.

Max, who has performed with a number of renowned orchestras around the world and is an educator as well, added that he could appreciate the work the performers put in.

“The dancers are so dedicated, you can just feel their dedication for what they are doing, you feel that you are just witnessing these people, who are living this performance, it’s beautiful,” Max said.

Max wished he could see Shen Yun more than once, and then again, to glean more from the performance. So taken was he by the music, that there were moments he paid more attention to it than to the dance.

“There are moments that you are listening to the music and you almost get so pulled in by the music that you forget in a way to watch the dancers, there is a lot to take in all at once. I am enjoying it,” he said.

A Shen Yun program changes each year, and is typically comprised of 20 vignettes including story-based dances, ethnic and folk dances, and classical Chinese dance pieces that show some aspect or dynasty from the Celestial Empire’s 5,000 years. A unique trait of ancient Chinese civilization is that its history has been passed down in written record continuously for five millennia. It is Shen Yun’s mission to revive the authentic traditional culture, which no longer be found in communist China today.

Max said that every time a new piece took the stage, he felt it was the best, and then again, and again. The performers were inspired, and the costumes were brilliant.

“You can’t really choose one thing,” he said.

With reporting by Silvio Vebeek and Catherine Yang.